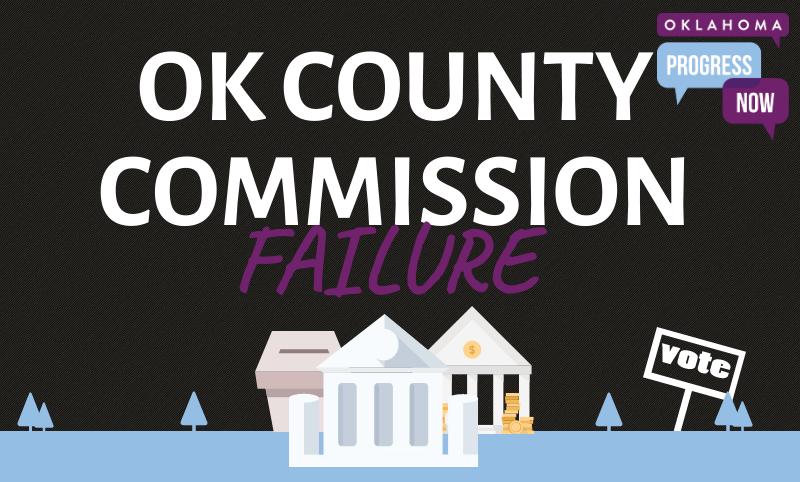 The situation in Oklahoma County does not have to be this way.

Recently, two of the Oklahoma County Commissioners, Brian Maughan and Kevin Calvey voted to take more than 90% of our CARES Act funding and divert it to the Oklahoma County Jail with no details about how it will be used. The rumors from people tasked with spending it include remodel work at the jail and other cosmetic fixes. Learn more about the history of the OK County Jail here. We can do better. This is millions of dollars that could have aided ALL people including undocumented & immigrant families with eviction harm reduction, utility assistance, access to testing, medical care, & food distribution. People are struggling with no relief in sight and this money grab giving the jail trust CARES is money is a WILDLY INAPPROPRIATE and UNETHICAL use of those funds. The Jail Trust and Oklahoma County Budget Board should be ASHAMED of these underhanded politics. On September 22, 2020, it was announced that Commissioner Calvey is now attempting to use the CARES money to replace existing budget obligations in the Sheriff's Department (like salaries) to free up money to move to the Jail Trust. The district attorney disagrees that this is legal because it violates the CARES Act and probably amounts to money laundering.

County government is like all large organizations. It is only as good as the people running it. If the people running it think the government has no role or that role is to punish people we don't like and line the pockets of their friends, this group is succeeding beyond measure. The county's main priority is the county jail. They treat it as a business that profits off of human suffering and perpetuates human rights abuses with no resolutions in sight. A new jail is not the solution. We need to address the concerns and problems that families are facing so we don't need jails at all. The County has the ability to do some of this work and participate more fully in being part of the solution. However, the lack of political will and callous disregard for the issues facing our community are an enormous barrier. The human rights violations within Oklahoma County Jail are especially heinous. The jail is unconstitutional. Free the people, give them services needed that they have been denied access to their whole lives, and shut down the jail. REMINDER: Here is a 2008 DOJ Report. Over 60 documented civil rights violations. DOJ came back in 2018, and the jail is still under federal oversight. The Oklahoma County Jail is an example of everything that is wrong with this state. It represents the failure of our social institutions, the racist, white supremacist past & present of this state, and failure of local leadership to work for the people instead of for power & profit. We the people demand the Trust, County Commissioners, & CJAC allow public comment at all meetings, full transparency of the source of their authority, decision-making, & funding, especially the robbery of millions of dollars from the federal CARES Act. It is important to reiterate that ALL JAILS ARE INHUMANE AND MUST BE ELIMINATED. Family separation by way of caging humans and children – whether at the border or here in OKC– is barbaric.

The County Budget Board sets many priorities. It is made up of all the people elected to the County Government. Historically this has been a body dominated by good old boys and more recently, reactionary conservatives, who steer substantial spending to things we don't need, to solve problems we don't have, and whose corruption funnels money to their campaign contributors and business partners. A thoughtful budget board could ask better questions, ask for citizen participation, focus on better priorities, and hold the county government more accountable to improve outcomes on our spending and address the concerns of citizens. As these bodies make decisions with no input from impacted communities, it makes us question the veracity, transparency, and intentions of such bodies. Trust is earned, not freely given. 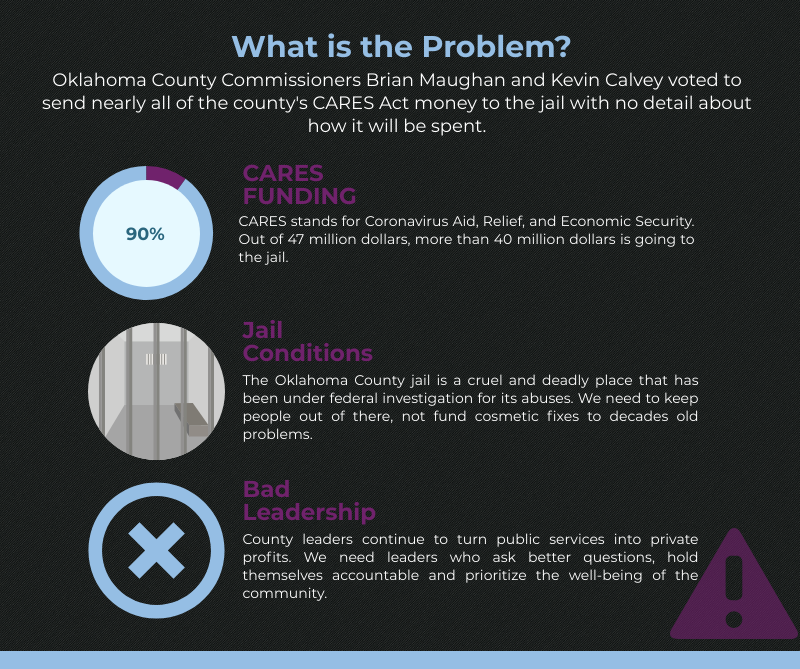 - Funding Social Services - The reason the Jail Trust did a CARES Act money grab is because funding is desperately needed. We recommend finding a way to get it from the millionaires and billionaires that sit on these commissions. We need to fund public services instead of punishing people endlessly.

- Mental Health - The public overwhelmingly supports these services. Right now ours are horrifying. Having had a family member recently experience a crisis, it is worse than we treat animals. You basically have to be long term homeless or commit a crime to get help, which is ridiculous. We should throw incredible amounts of money at it to create programs, support structures, financial benefits, proactive, qualified, trauma-informed responders outside of law enforcement to get people help when they need it. Long waits, huge barriers and reliance on the criminal legal system is a disaster.

- Persons with Substance Use Disorders - Like mental health, we simply need to sustainably fund more programs. Right now, programs either don't exist or are so threadbare that a person with addiction(s) are not getting the help they need. We need many more options, available as soon as people are ready to utilize them and focused on a range of addiction. With more funding, the quality and accessibility to good programs should increase and we can divert less people into the criminal legal system.

- Persons who are Homeless - The funding and programs can come from anywhere on this but it needs to happen and the bigger the better. Oklahoma County has been experiencing a rapid housing boom but in the sense that it is becoming increasingly unaffordable, focused almost exclusively on the high end and to the benefit of land speculators and developers who become incredibly wealthy. The government just needs to stop it. Funding affordable housing projects, improving land use (because we have lots of land), and encouraging denser development can all help bring down costs and increase the stock of desirable, affordable housing and remove pressure off families.

- Improve the courts and stop fines and fees - Fines and fees are the most regressive form of taxation we have. We also don't collect on a huge percentage of it because the people we are trying to get it from are extremely poor. We should stop this immediately and counterintuitively provide resources to people instead. Instead of people getting their lives back together, we spend tax money terrorizing people so they never get back into society.

- End Cash Bail - Cash bail is the reason many people are stuck and languishing in the jail. Every single day nearly half a million people are left to struggle in jail cells across America waiting for their cases to move forward despite not being charged with a crime. These people make up nearly two-thirds of America’s jail population. Bail is the only way to buy their freedom. It devastates communities and families for generations. It is the backbone of mass incarceration and racial inequality. This war is waged on the backs of low-income people of color. People must wait for weeks, months, and years for their cases to move forward. People lose their jobs, income, and ties to their community.

- Be wary of philanthrocapitalism - Many philanthropists are moving into the space traditionally held by social welfare, government programs. These should be approached with extreme caution. Many times these organizations perpetuate the issues they are trying to address. While they preach assistance, they often come with strings and if the strings are broken, the response is often more punitive than the original offense. They are often ego driven by their primary benefactor and what they care about is driven by that vs what the actual problems are and what the community needs. They also vastly underestimate the resources needed to operate at scale. While an individual billionaire is rich, our collective resources and needs are greater. What is truly needed is wealth redistribution and the community needs to be in the driver seat, holding people accountable and set up a sustainable, long term funding source, if the problem is systemic or on-going. 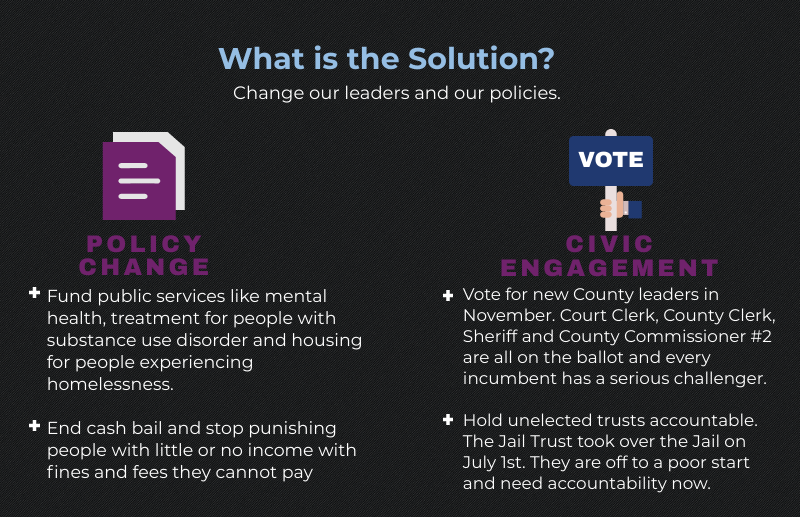 In Oklahoma County, the Oklahoma County Criminal Justice Advisory Council (CJAC) and Oklahoma County Criminal Justice Authority (Jail Trust) now manage the counties largest asset (the jail) and are nearly entirely unaccountable. Because these bodies are made up of many powerful, connected people, they often fail to deliberate appropriately about decisions. Staff is left to their own devices and nobody really knows what is going on until there is a problem. While the Sheriff wasn't perfect, they are elected and it is a full-time job with time to address problems. These boards are neither. The people on them also have incredible power to fix problems. Acting like everything must take years or move at a snails pace is more an indictment of their leadership than any sort of material or political reality.

If these bodies need more money, they should be made to ask for it. Grabbing CARES Act money or using intergovernmental political maneuvers to scoop up public money not intended for those purposes (like TIFs or raiding other county funds) is inappropriate and merely move the problems around. Defunding schools to fund the jail is probably not going to work long term.

Roy Williams with the Chamber has an entire political staff and campaign apparatus. If they need $25M/year in mental health and substance abuse funding for Oklahoma County, draft up a campaign and go get it. Run a campaign to pass a county high earner income tax (a 0.5% tax would raise tens of millions of dollars) or put impact fees on developers or any number of modest taxes on wealthier citizens to pay for it and it'd pass overwhelmingly. Don't go on about how much you care about these problems, SHOW US THE MONEY!

We'll be sending out notices about candidate elections or actions related to the county. If this issue is important to you, sign up below and we'll keep you connected on these issues.