As voter registration has officially closed (the deadline was Oct 9th), here is our breakdown for the November ballot. We'll focus on the state questions, judges and for OKC, the charter changes. If you are curious about the Oklahoma County races, check those our here. Unlike many groups, we offer recommendations that are explicitly biased toward people and solutions that will benefit the greater good. We also talked about these on the show a couple weeks back.

The biggest question on the ballot is SQ 805. This is a criminal justice reform measure that addresses sentencing enhancements. Oklahoma has made meaningful steps toward reform in recent years but our incarceration rate is still number 2 in the country. You can find more information about the measure here. There are many scare tactics going down against this measure.

The biggest scare tactic focuses on the distinction of violent vs non-violent crime. SQ 805 locks the violent crimes list as of January 1, 2020 to prevent tampering by the legislature with the measure later. As of January 2020, some things people would think are violent (like domestic violence) are not on the violent crimes list and they haven't been for decades. This is an almost meaningless designation. Lots of crimes are considered violent even if no actual violence is done (armed robbery for example, regardless of whether the armament is real or used or not is violent). Beyond that, the way the overwhelming majority of enhancements are used is to take a non-violent crime (theft, bad checks, drugs, etc) and enhance you into much harsher penalty categories. Oklahoma puts people away for a long time, hence our astronomical incarceration rate.

Opponents also like to point out horrific crimes (that are happening under the current system) and somehow argue SQ 805 will make those worse. This doesn't make any sense for two reasons. For one, murder or any number of more frightening crimes are still violent and still carry harsh penalties like life in prison, SQ 805 doesn't affect that. Second, Oklahoma has had the highest incarceration rate in the world. Our sentences are the most severe in the world. If incarceration worked, we should be a utopia that is nearly free of crime. This is of course, not the case.

The most grotesque part of the anti-805 campaign is the focus on punishment. Some domestic violence advocates are arguing we need to make punishment worse because without it abusers will get away with it. This doesn't fit with reality. Oklahoma has the second highest rate of murder by a partner under our current system and murder is obviously a very harshly punished crime. Many other advocates (and victims) point out that due to the harsh system and lack of support, lower level offenders cannot get help when they need it. Victims have few options except to destroy their partner's life with the criminal justice system AND THAT IS THE CURRENT SYSTEM. SQ 805, if anything, will free up resources (both police and prosecutor as well as prisons) to focus on something other than punishment.

The question addresses the Tobacco Settlement Endowment Trust (TSET). State Question 814 will allow the legislature to spend more of the money instead of the endowment. Currently, the legislature only gets to spend 25% of the annual proceeds of the settlement and 75% goes to the trust to be spent on public health, this would flip that. The current reasoning is to use this money to pay for Medicaid expansion. This is a bad idea. For one, we underfund everything in Oklahoma and the TSET money fills critical holes in our public health infrastructure. Medicaid Expansion already has potential funding sources like fees on hospitals. Mostly this just allows the legislature and Governor to continue to raid funds across the government so they can keep taxes lower on the wealthy and powerful.

The history of TSET is pretty interesting. It feels back from a day when the government saw problems and came up with reasonable, thoughtful solutions instead of right-wing reactionary showboating. The board of directors has all sorts of mechanisms to prevent overt politicization and other issues. The biggest complaint is the rather large advertising budget which goes to anti-smoking campaigns and would likely be cut severely after this. We can debate about advertising, but public health campaigns are fairly tried and true in the literature and it costs money to get the word out or educate people on their options. Given the current health crisis and the utter lack of response, it isn't terribly surprising this legislature driven state question is on the ballot.

At the state level, judges are appointed by the Governor based on a list of three provided by the Judicial Nominating Commission. At the end of their term, these judges have retention elections for their position. There are not many sources for information about judges. Here is a website from the Oklahoma Bar that gives you a resume-like breakdown of each judge. It also has links to good information on how judges are chosen, it is worth checking out.

The short breakdown here is to avoid giving Stitt any additional influence. Many of these judges were appointed by previous Democratic administrations and even Gov. Fallin's picks tend to not be total ideologues. Stitt has a very specific vision of government and how it should work and it is not for the little guy. While the Nominating Commission has a built-in moderating force due to its makeup, it is still worth avoiding giving Stitt more power. Vote to retain the judges. 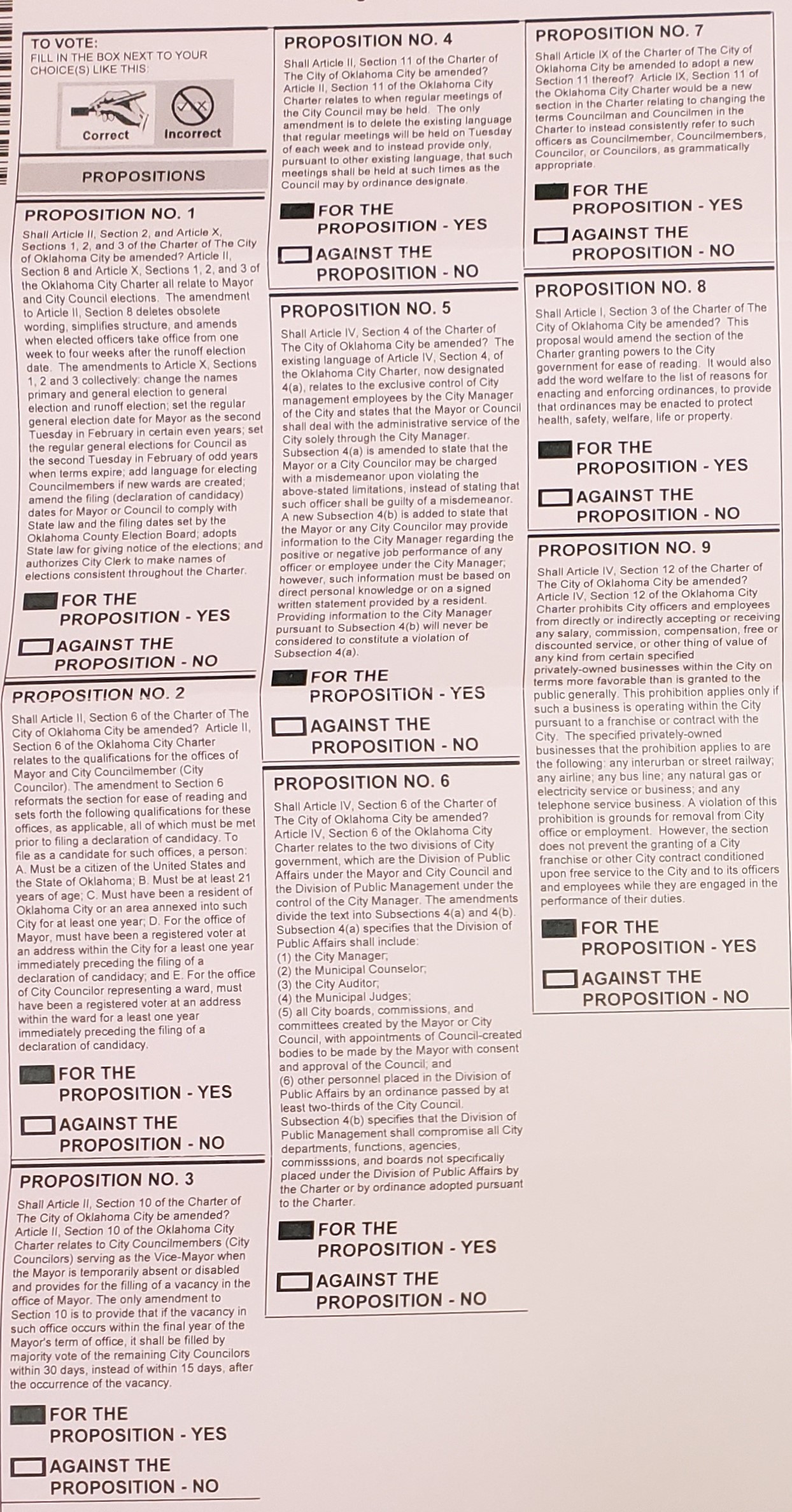 The Oklahoma City Charter has nine changes. Here is a good podcast from Let's Fix This with Councilpersons JoBeth Hamon and James Cooper. Below is short  breakdown of each one. The tl:dr is to vote yes on all of them.

Proposition No. 1: This changes the names of the elections (previously primary and general to general and runoff) to reflect what they actually are.

Proposition No. 2: Changes the residency requirement to run for Mayor or Council to one year in OKC or the Ward respectively (down from three years previously and at least six months in a particular Ward). It also makes them all match. It changes the rules slightly, but it simplifies and standardizes it to State level offices making it make more sense overall.

Proposition No. 3: It gives them 30 days, instead of 15, to fill a vacancy of the Mayor or Council. It mostly relates to giving them time to have their regularly scheduled meetings (which often happen every two weeks).

Proposition No. 4: Allows them more flexibility on when they have council meetings and conforms more with how they actually do business.

Proposition No. 5: This creates a specific process for City elected leaders to give feedback on city staff. Oklahoma City is a City Manager system which means the City Manager is actually the chief executive of the city and handles employment issues. It potentially violates the charter for the Mayor or Council to give feedback or report issues with City employees, this allows a reasonable way for that to happen and leaves it to the City Manager to investigate. There is also potential here for using this on police misconduct. We've not heard it framed that way, but it does seem like a reasonable application.

Proposition No. 6: Clarifies what the Mayor and Council actually oversee and how the responsibilities are divided. It has a typo with compromise should be comprise (there is some process to fix this afterward as it was a scriveners error).

Proposition No. 7: This removes the gendered language that every councilor had to be a man or men. They're now members.

Proposition No. 8: Like the US Constitution, this proposition will add "welfare" to the list of things the city is responsible for protecting.

Proposition No. 9: This updates and clarifies language around the prohibition of city officers and employees from receiving gifts from businesses that contract with the city. It specifically lists a number of transportation and utility services.