During Winter Storm Uri in February 2021, Oklahomans witnessed a massive explosion in natural gas prices over a few day period. Major utilities purchased more gas by cost in a few days than they do in a year. Instead of investigating price gouging, clawing back excessive profits or demanding utilities that were ill-prepared for winter weather pay part of the burden, the government of Oklahoma passed Securitization laws that force Oklahomans to pay additional utility fees for the next 25+ years to pay for these natural gas charges incurred in Feb 2021.

Since the storm, our electricity and gas bills have risen dramatically. All together, Oklahomans were hit with the largest single tax increase in history. More than $4 billion dollars will be paid out over the next 25+ years. This was a market failure, not an infrastructure one. Gas kept flowing, electricity was produced (except for brief interruptions), we just paid way, way more for it and now have a generation worth of bond payments to show for it. 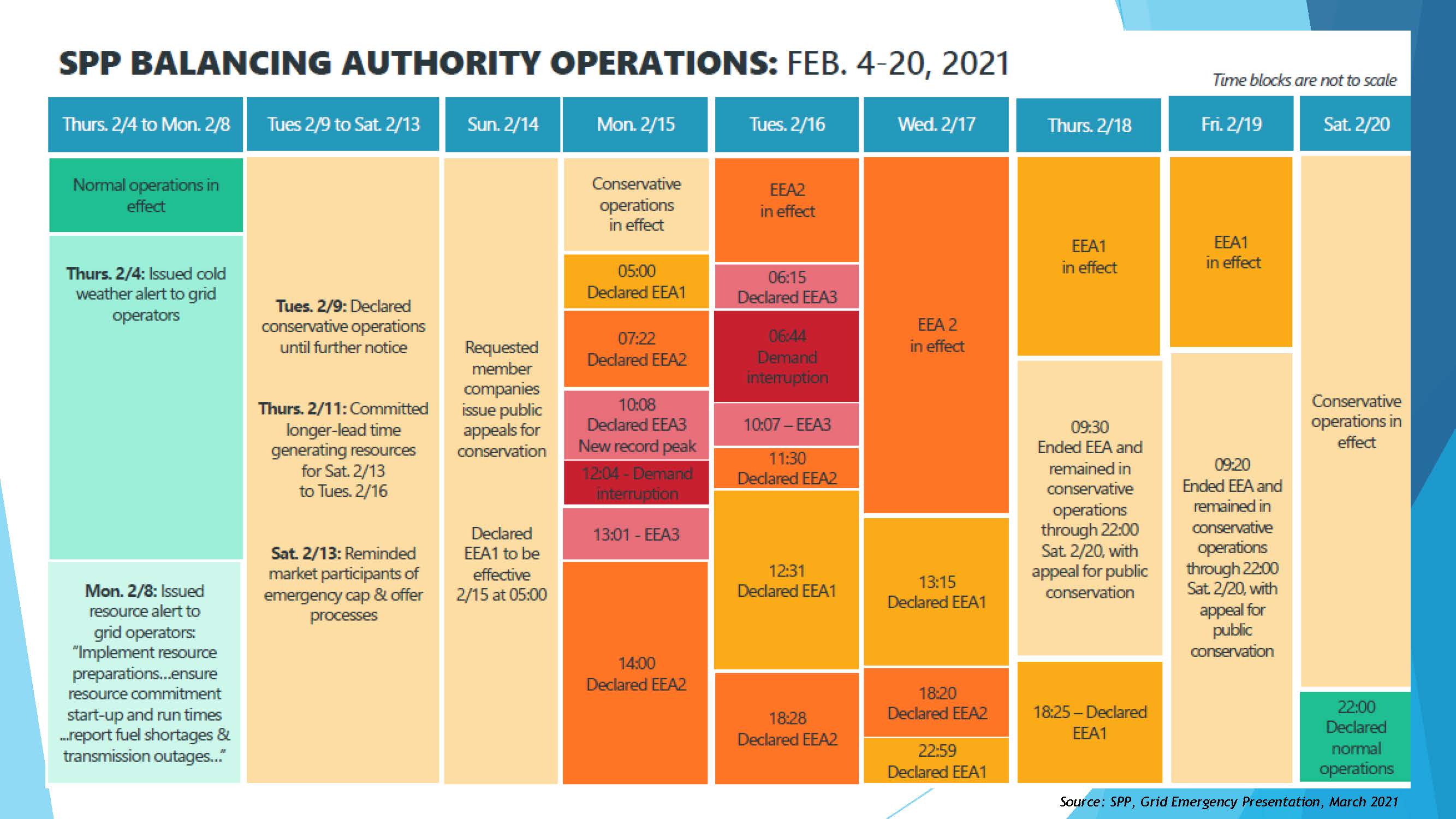 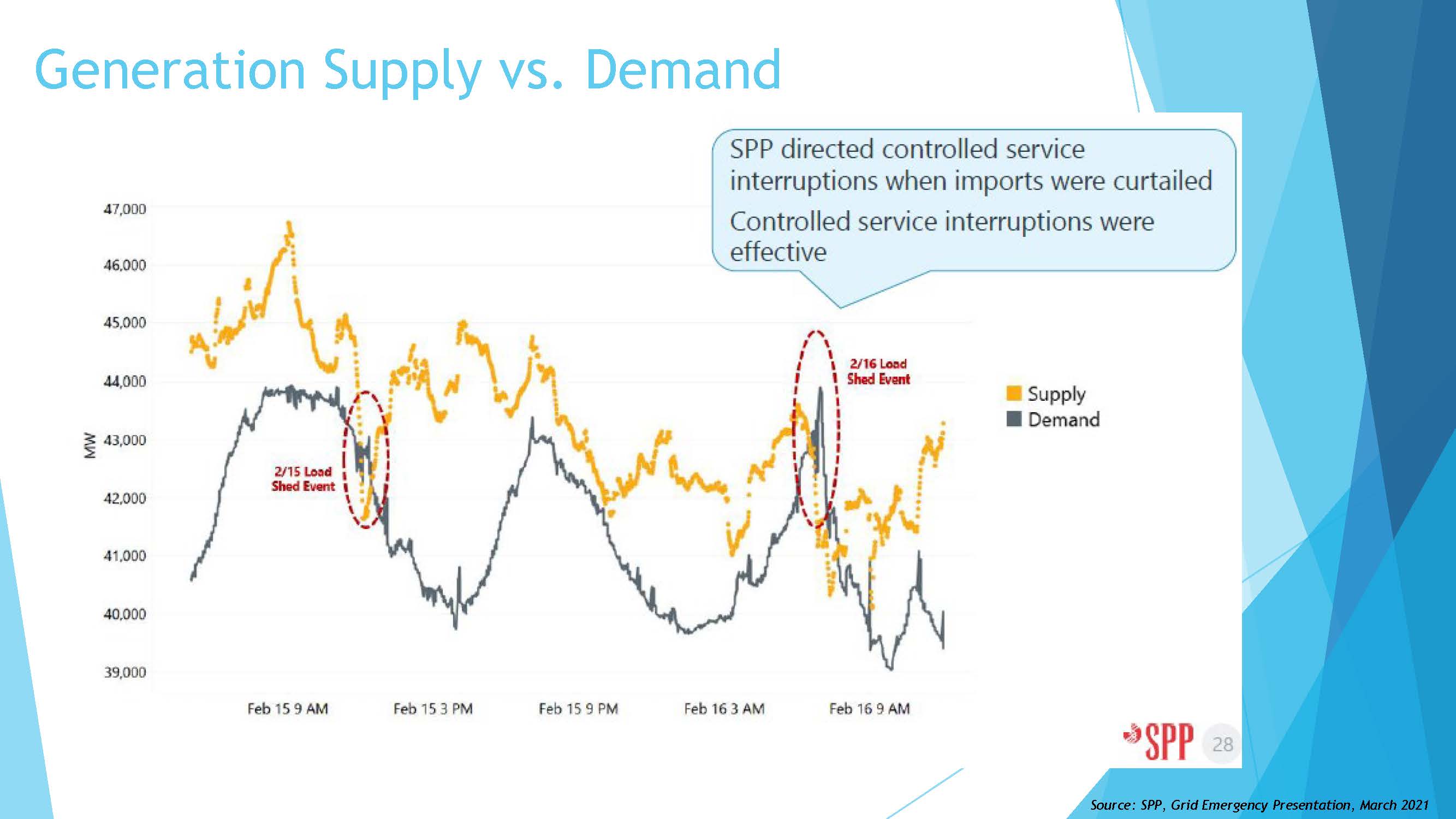 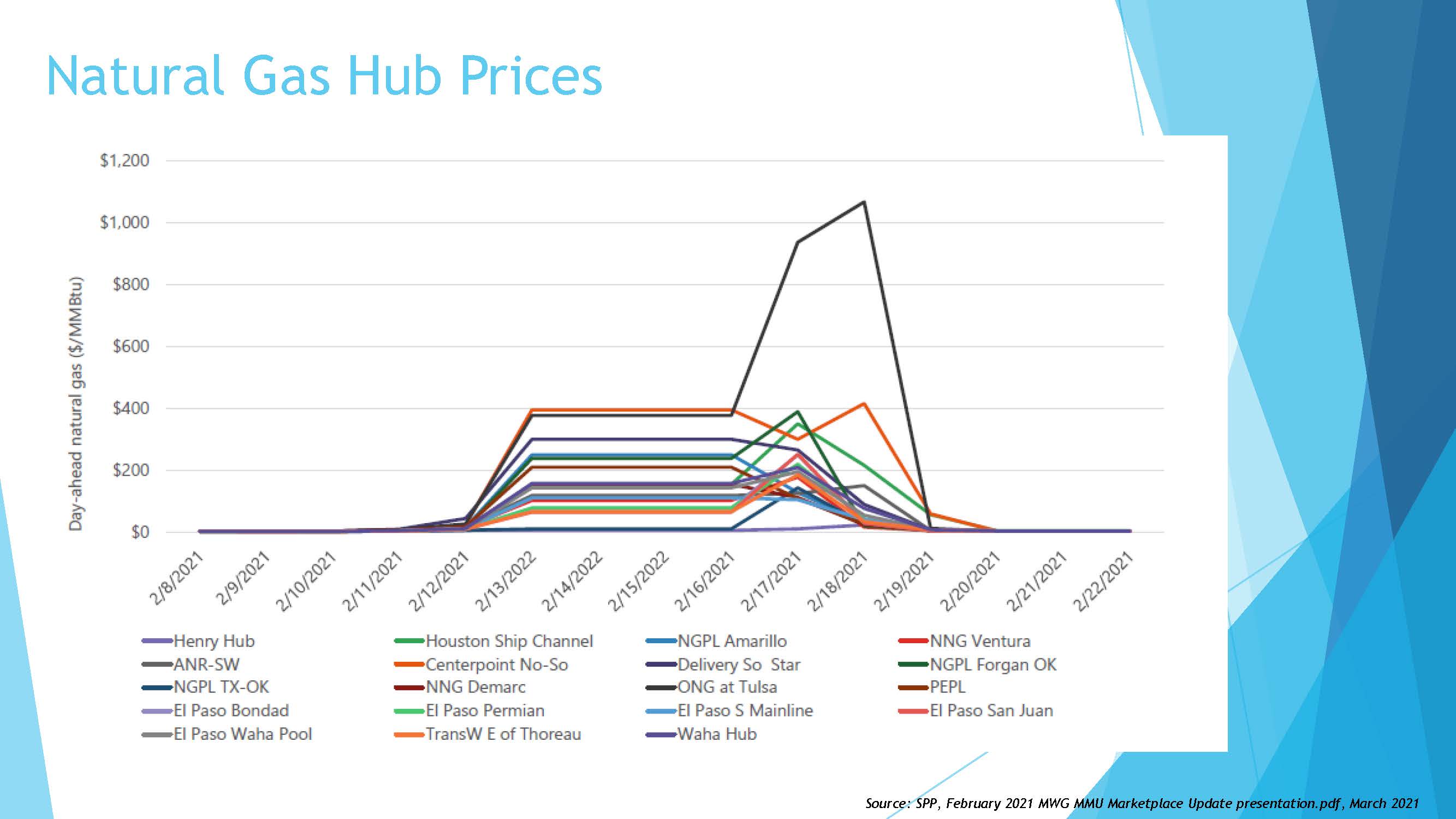 Through a series of public records requests and candid conversations, Oklahoma Progress Now has obtained never before seen emails, text messages, audio recordings and presentations showing how this happened and who was responsible. We will unpack Oklahoma’s response to Winter Storm Uri. We have identified who wrote and supported the Securitization laws forcing Oklahomans to pay these astronomical bills, who benefited the most from this arrangement and who failed to hold anyone accountable for their failures or the massive costs to Oklahoma families.

This is a story of regulatory capture, gross mismanagement by utilities, government incompetence and unbridled corruption at the highest levels of Oklahoma government. Dozens of public officials, politicians and industry insiders colluded to soak Oklahoma ratepayers with decades of costs without doing the most basic due diligence or asking any questions that oppose the interests of private energy company profits. Our cost recovery from Winter Storm Uri has been the worst in the nation (Cost Recovery Study) and elected leaders at first via ignorance but eventually through deception protected powerful corporate interests at our expense.

Start of the Blame Game

While many are to blame, that blame is not shared equally among the players. The Corporation Commission, the legislature, specifically Sen Kim David and Sen Greg Treat, Attorney General Hunter and Governor Kevin Stitt bear the most responsibility. In our research, utility executives, lobbyists and energy interests had seats at the table, while consumer advocates and regular citizens largely watched from the sidelines.

The questions of when and where need to be answered before who. The timeline on this is absurd by legislative standards. Winter Storm Uri peaked in the days around Valentine’s Day 2021. Over a three day period, Oklahoma utilities and contract customers paid astronomical prices for natural gas when markets started to breakdown. There are complicated reasons this happened, mostly relating to corporate greed and incompetence, but we never got to address those, we jumped straight to how are we going to pay for it. The most concerning part is that key leaders knew this!

The legislation (SB 1049 and SB 1050) was written between the end of February and early April. This is lightning fast by legislative standards. It was then passed and signed into law by Gov Kevin Stitt in less than two weeks. Debate and discussion on the largest tax increase in Oklahoma history, more than $4B paid out over 25+ years, was barely discussed. A mechanism to assume all responsibility to pay these highly questionable gas bills was made law of the land. At this point, we didn’t even know the names of the companies who got paid!

Within days, OG&E was lobbying the commission to advance its agenda. The President of OG&E, lobbyists and others started sending letters and messaging demanding payment for gas purchases. 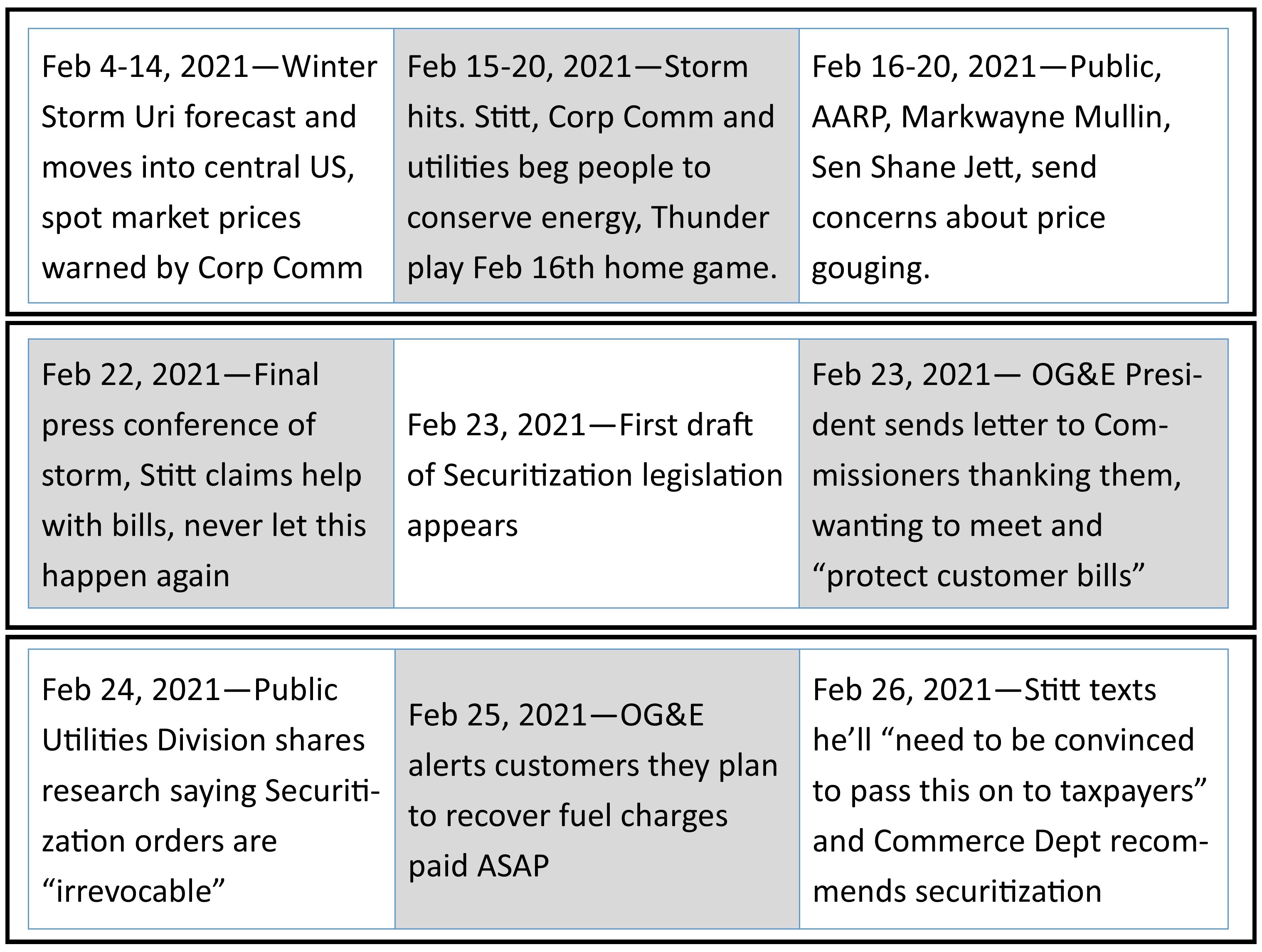 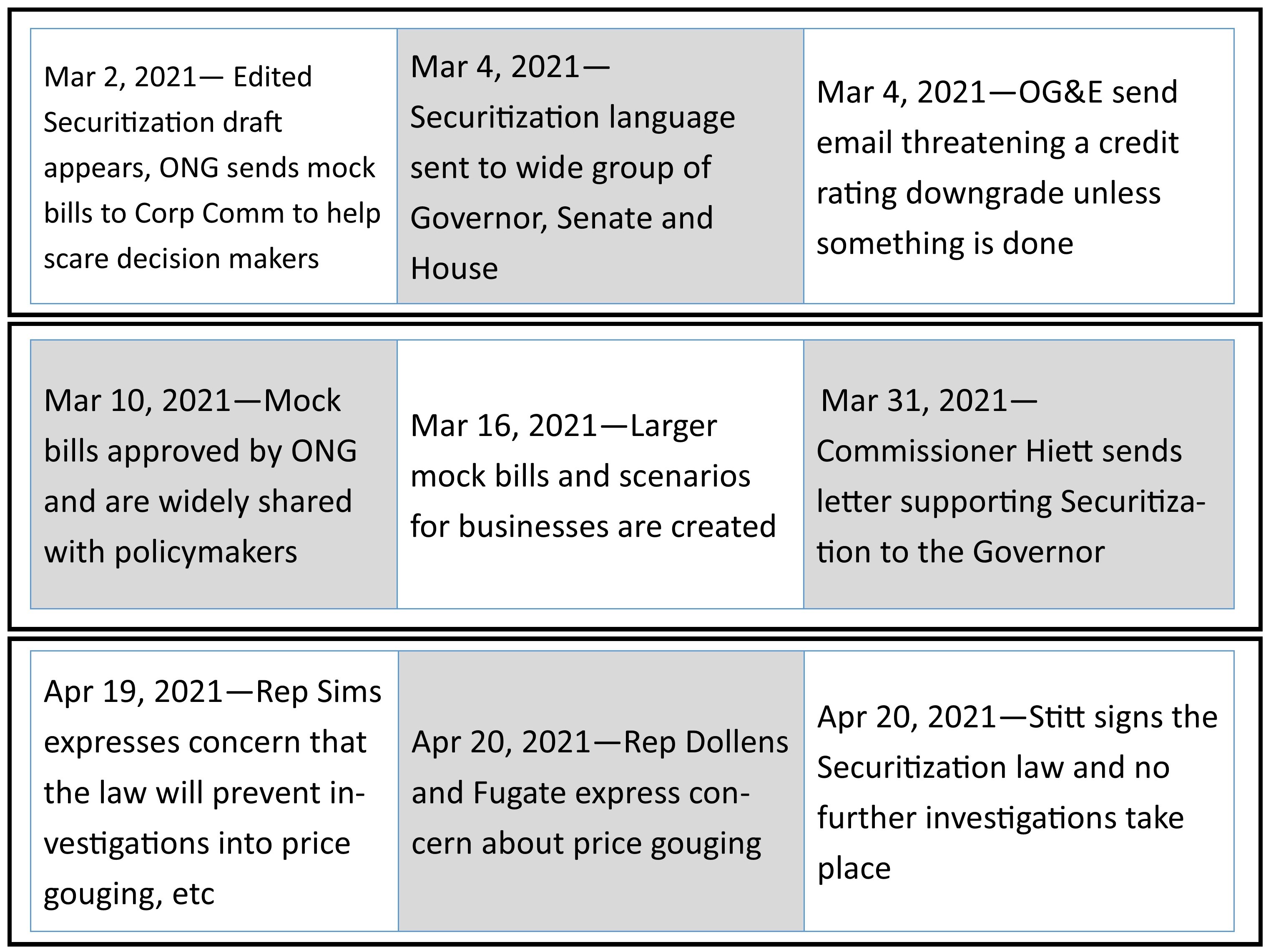 Within days of the freeze, utility company analysts, lobbyists and even the CEO went to work to protect their interests. Complex corporate relationships and structures that are never questioned or analyzed make it very difficult to determine where and how these companies make their profit but they are profitable. Very profitable. In the week following the storm, utility companies do a full court press on regulators to push for payment for the fuel charges they assumed.

In the available communications between state agencies, regulators and utility companies there is virtually no mention of price gouging, market manipulation, excessive profits or unnecessary exposure to natural gas spot markets. OG&E, ONG, PSO and others just bought natural gas at hundreds of times the normal price and there are virtually no questions asked in the immediate aftermath about how they let something like this happen. 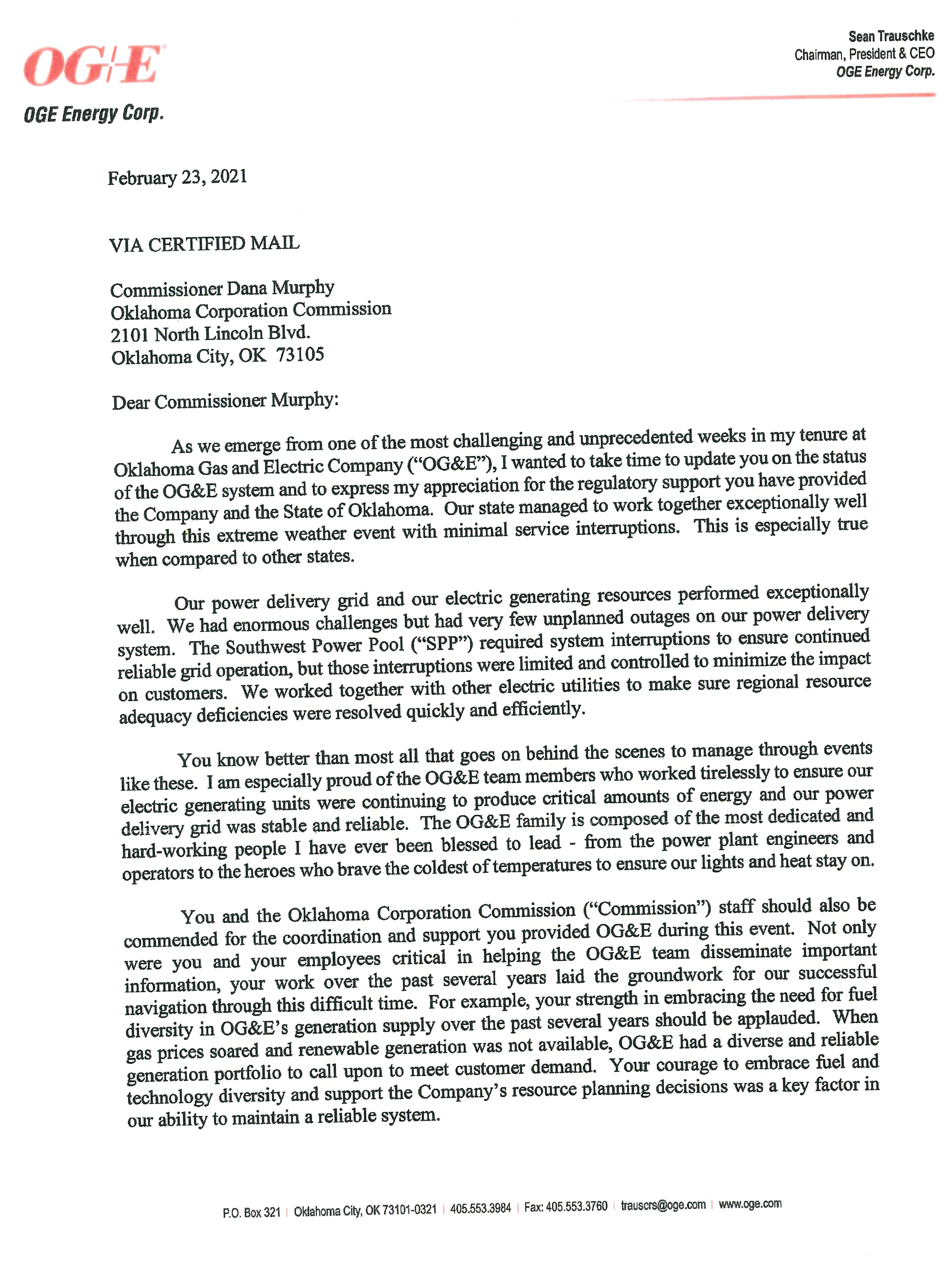 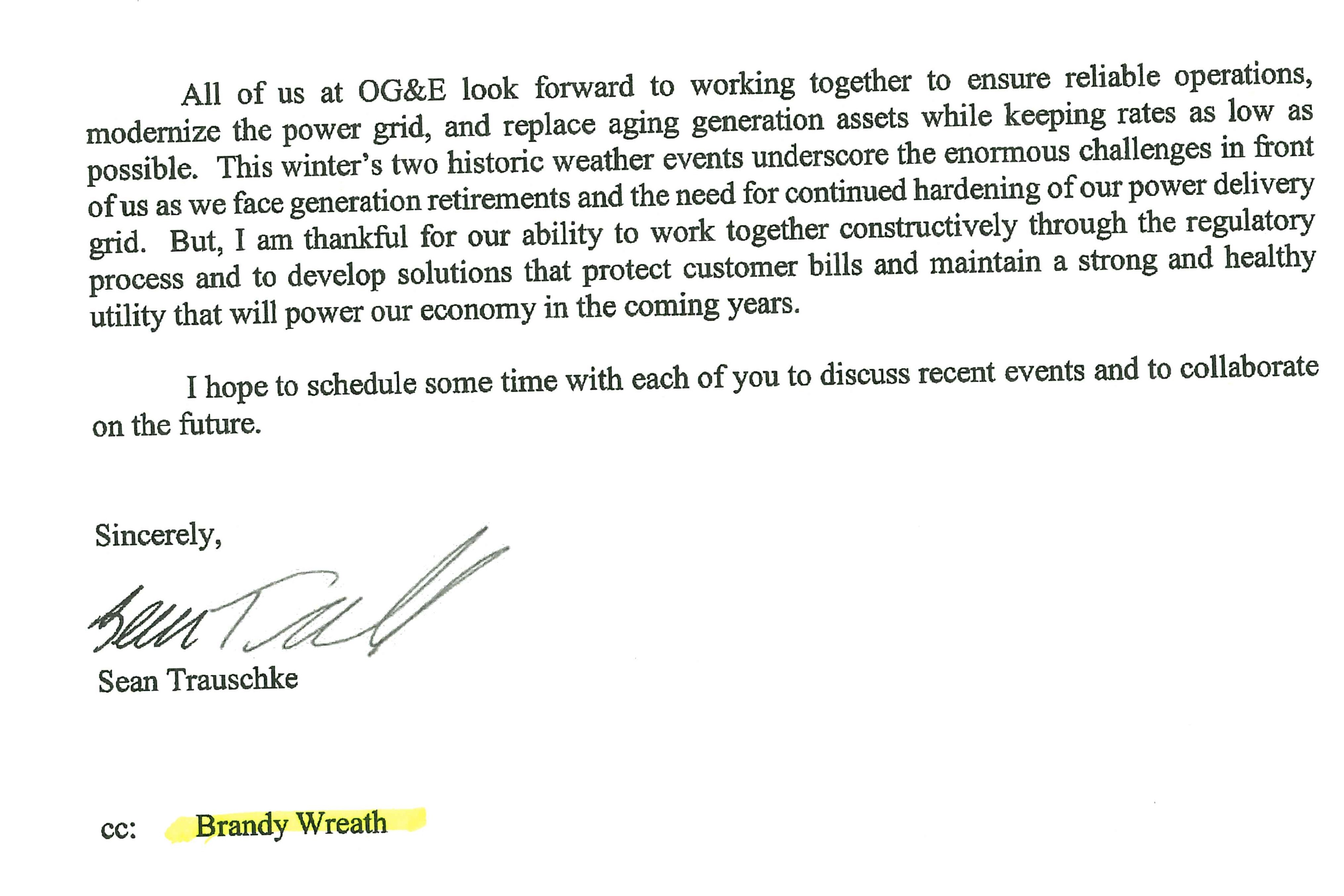 In the race to make us pay, Legislators, regulators and Stitt fail to heed their own concerns.

While the timeline on this process was incredibly compressed, it was obvious from early on that a wide variety of Republican political leaders had explicit concerns about the fuel charges including price gouging and ignored them. 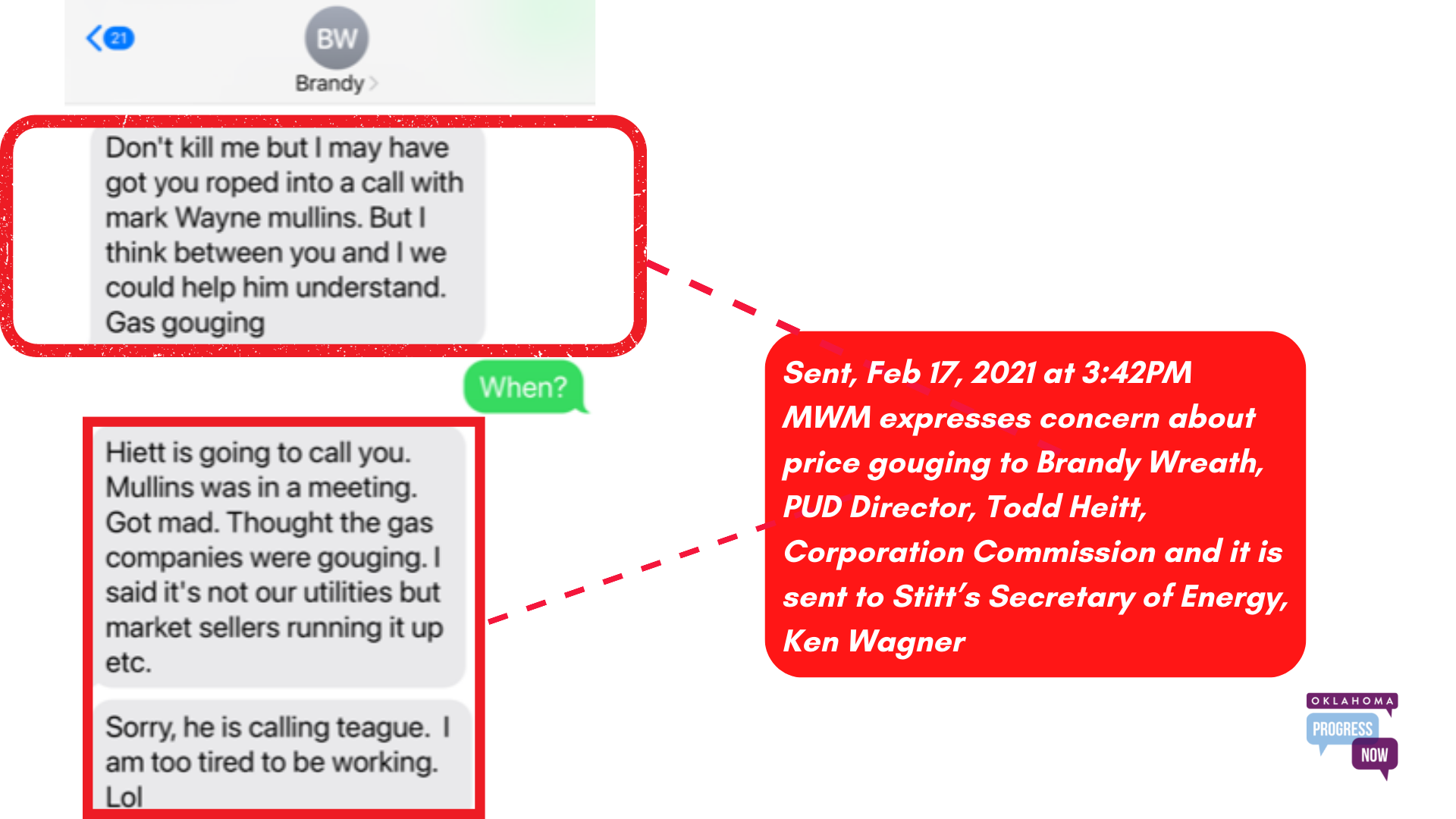 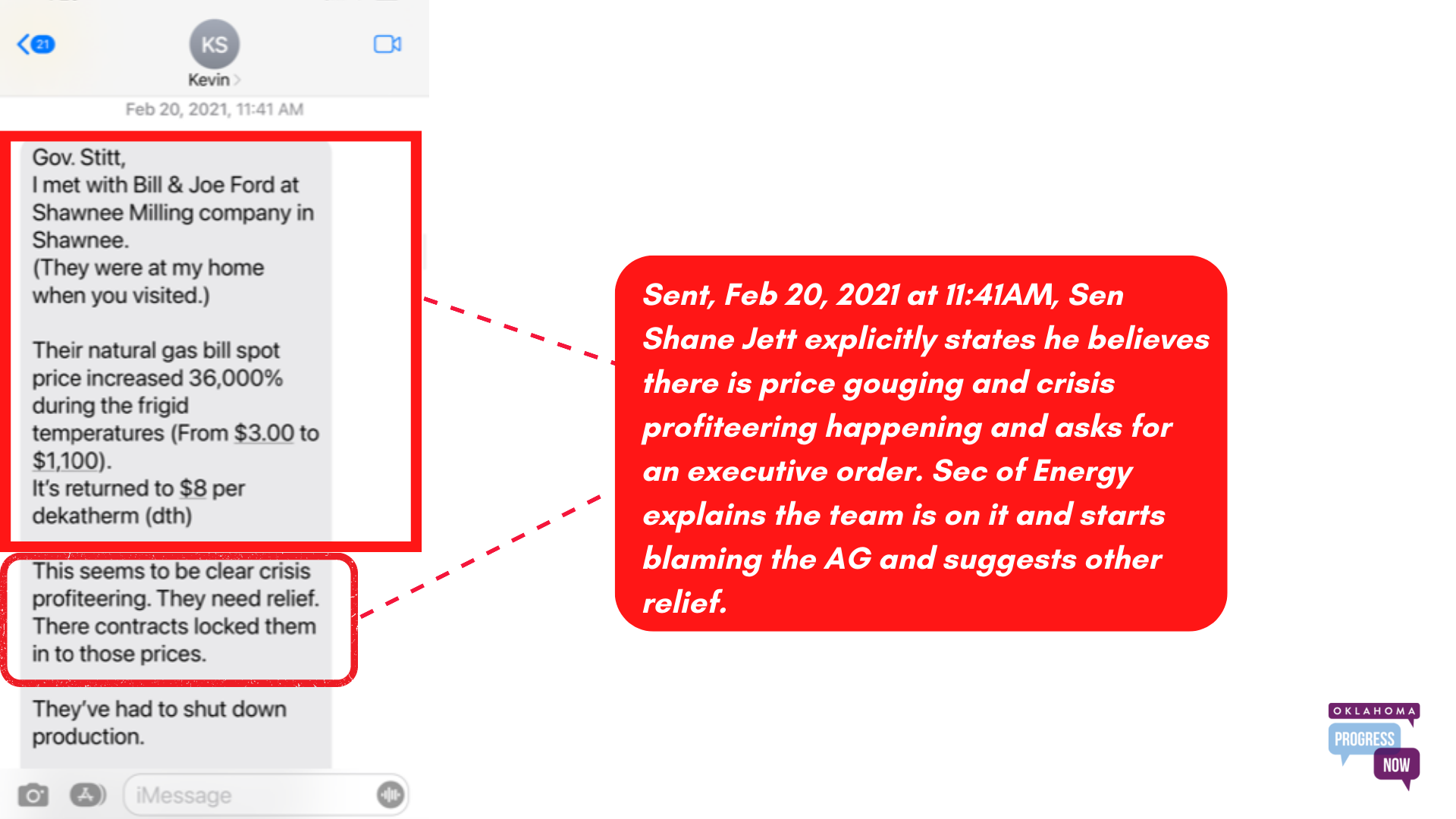 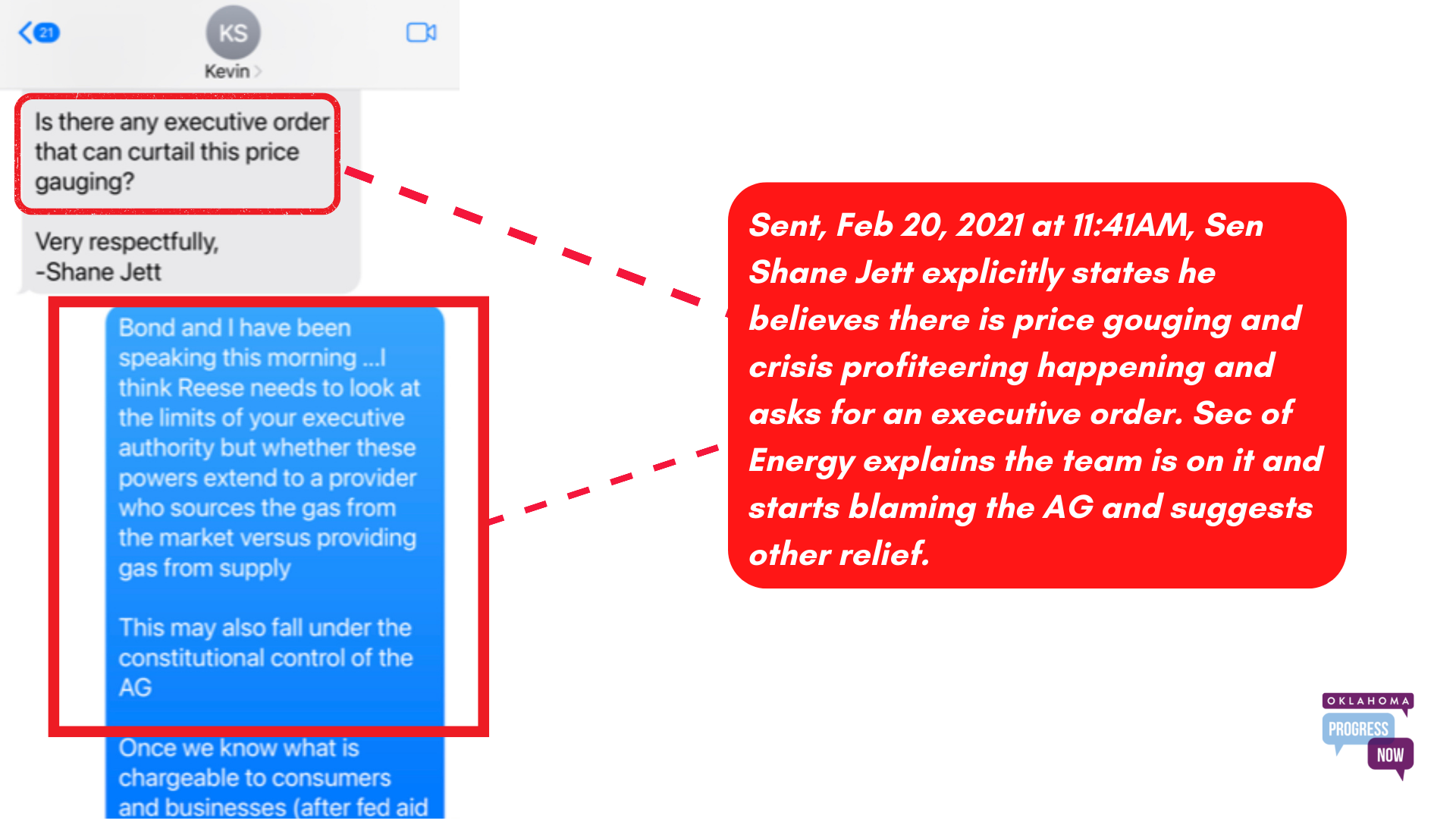 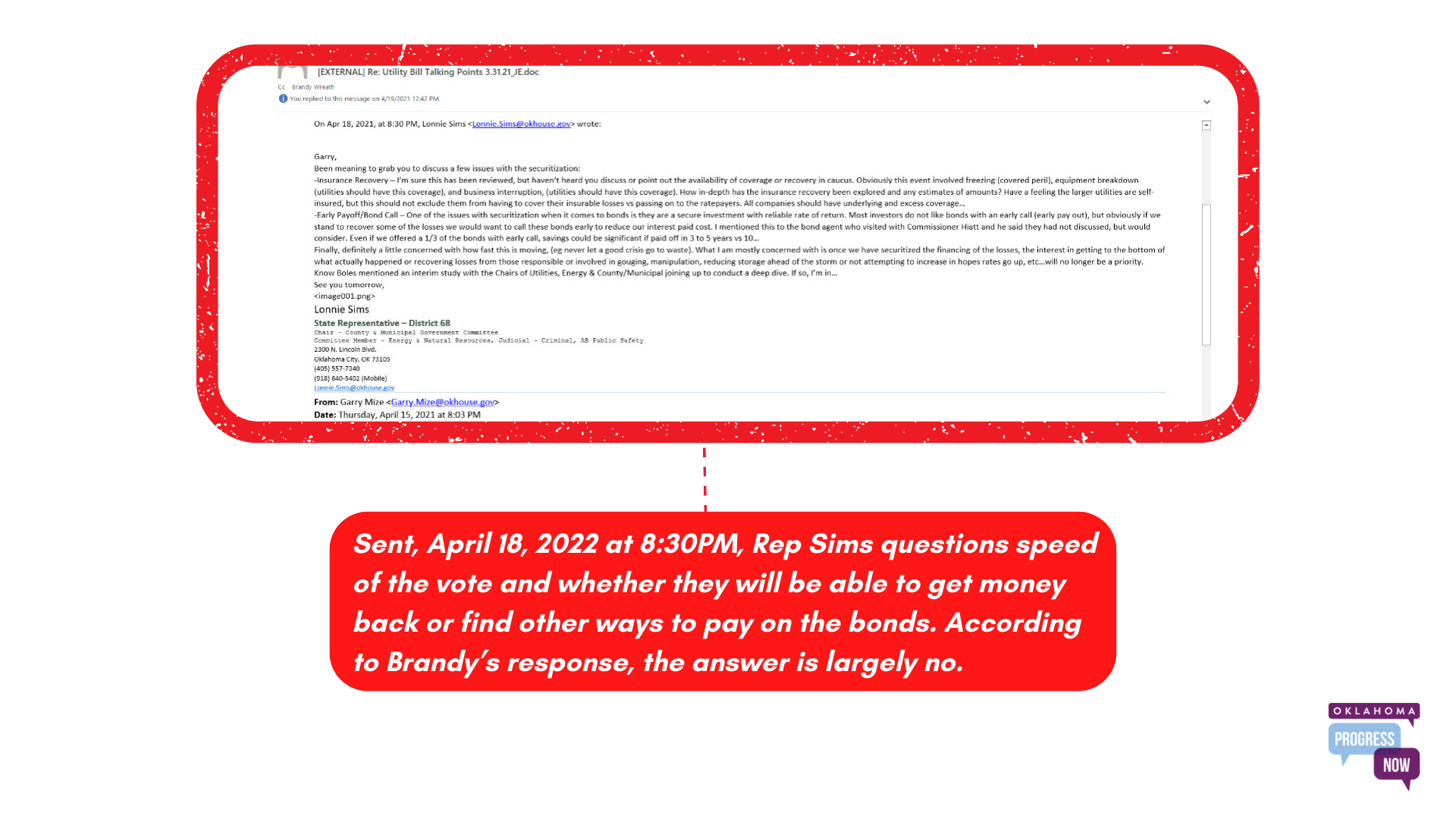 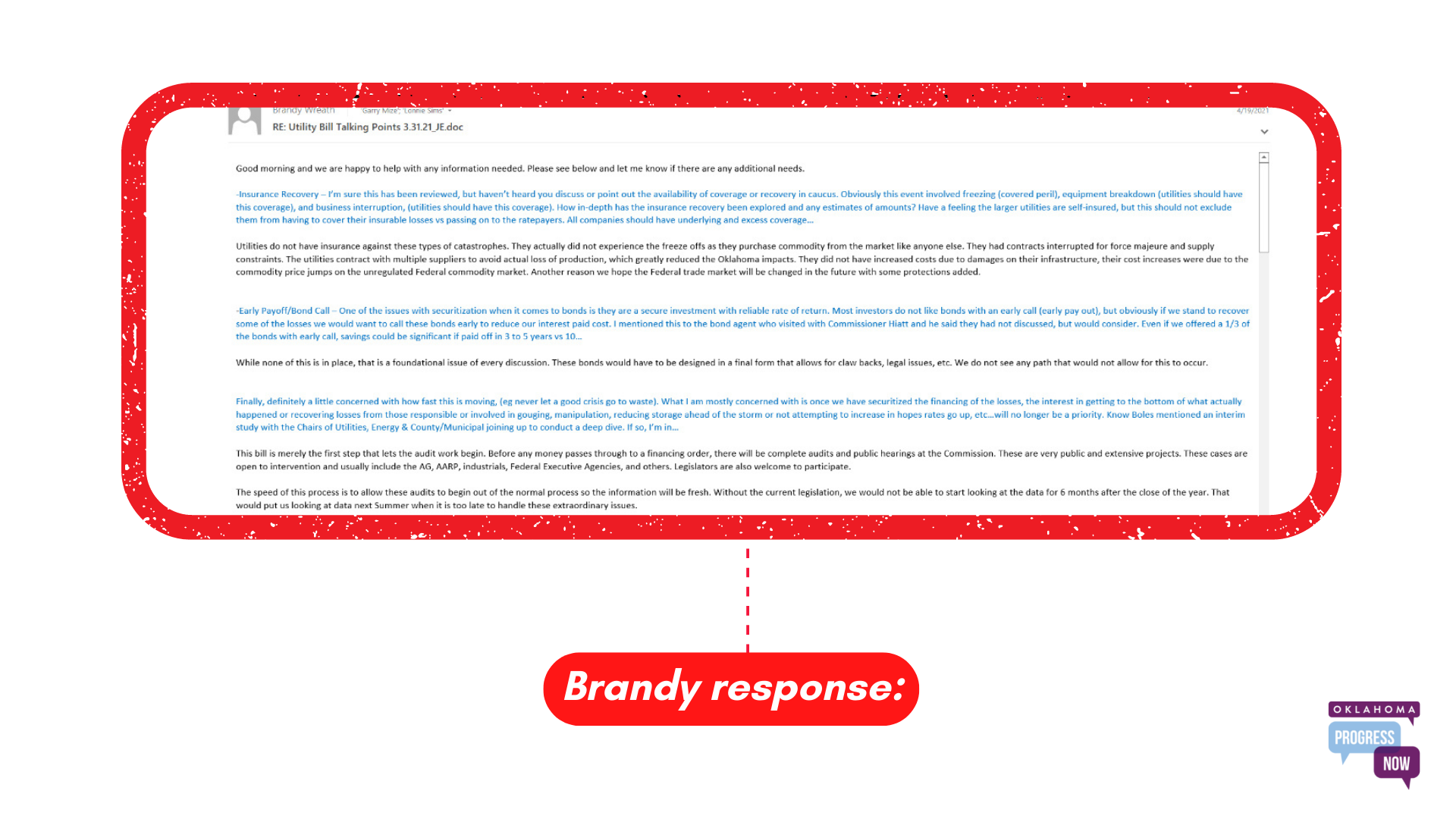 The number of people ignoring their own good sense in a rush to get this done was staggering. Emails and texts from Brandy Wreath (Director of the Public Utilities Division), Rep Markwayne Mullin, Governor Stitt, the Secretary of Energy, members of the Oklahoma House and random members of the public all show immediate as well as ongoing concerns about price gouging and potential costs to consumers. Within days, they started to change course, downplay concerns and ultimately ignore them. There are also concerns that specific questions raised by legislators were ignored by regulators as seen in the emails above and this research done by the corporation commission that might not have reached key decision makers.

Under the list of “Cons” for securitization, is that securitized charges are "irrevocable." This information could effectively end any investigations into market manipulation or price gouging. Whether this information reached a wider audience is deeply concerning. It is a thing that definitely should be addressed before ratepayers are on the hook.

State regulators with direct input from utility lobbyists and executives set about trying to pass a securitization law to make ratepayers pay. Emails and presentations show that utilities immediately invoked outlandish scare tactics to get payment. Mock bills showing ratepayers paying thousands of dollars were drawn up and sent to regulators and policymakers directly from utility employees in their regulatory department.

On March 3, ONG sends mock bills to the PUD Director to use to scare policymakers.

These fake bills would have been impossible for many families to pay and would not have been able to go into effect without many regulatory steps to question the prudence and reasonableness of recovery of fuel charges. The government has real power to push back against utilities. For example, why were you so exposed to spot markets that you had to buy gas at 300x the normal rate? What happened was a fear-based campaign to convince Stitt, regulators and legislators to pass securitization quickly, before we even knew publicly who had been paid for those fuel charges.