The midterm results are in and while the red wave failed to form nationwide, its deep red ocean origins are alive and well in Oklahoma. The wave formed in some of the most frustrating ways.

Oklahoma did what Oklahoma so often does, disappointed people who believe in having a functional government and system that cares for its population. Despite many local polls showing a tight race, Joy Hofmeister lost big against a fairly unpopular Kevin Stitt. All the other state-wide races fared even worse. Down ballot was equally depressing with JJ Dossett, one of the few Dems left in the Senate losing and a lone house pickup in Tulsa. Oklahoma County had a glimmer of hope but how bright remains to be seen.

We'll look from the top on down at what happened, who is to blame and how things went disastrously wrong for Democrats and the progressive left.

First, the local polls completely missed the mark. National polls and other sources, left us with a lot of concern. If a pollster was polling Oklahoma along with other states like Ohio, Arizona or Florida, they had Oklahoma deeply in Stitt's corner. I never saw one with Joy within double digits. There was also that concerning deal where one local pollster had Jena Nelson up by several points in September, a complete swap in October and then Jena back up again in the last week.

Joy Hofmeister's (along with Kendra Horn's) results were a disaster for state-wide Democratic performance. Nobody paid Jena Nelson any mind until after the August runoff. She was a novice candidate who was easily one of the most thoughtful and charming people on the ballot. She did admirably for being totally ignored until the last months of the election.

Despite Joy having genuine enthusiasm from supporters, state-wide name ID, recent electoral success, and an opponent who is deeply unpopular with the Dem base, Joy managed to under-perform Drew Edmondson from 2018. Drew ran a serviceable campaign but he was in the twilight of his political career and hardly appealed to the current base of the Dem party. Apparently, neither did Joy.

The strategy from both the campaign and supportive dark money groups was to supercharge the old centrist strategy of trying to sway moderate Republicans away from their party and into the Democratic one. This is known in the industry as a “persuasion campaign." Being "aggressively moderate" is apparently not the ticket. Not only did painting Stitt as a corrupt jerk not work but neither did running a former Republican as a Democrat. Republicans voted straight party at exactly the same rate as before. Turnout continued to remain anemic in Oklahoma, we'll talk about that later and the most important thing about this strategy though is NOBODY SWITCHED SIDES! Despite all the millions, Joy did no better.

While we are technically a "dark money" group our spending wasn't what got heard. We punch above our weight in some online spaces, with earned media. Among political operatives, our budget is tiny. Our total budget during the election cycle, nearly all of it going to pay contractors to make content or pay for our small office, internet and zoom account (zero TV ad buys and about $100 on digital ads), was less than $35,000. There were dark money groups that spent more than 3x that amount on a single Super Bowl ad.

I will take a moment though to give a shout out to our successes. While many groups will just flat lie about their voter engagement or media numbers, all of our stuff comes straight from social media analytics or verifiable Google searches and are easily compared to other creators, campaigns, and entities. We created a TikTok account in July 2022 and by September had nearly 4,000 followers and over 100,000 video views per month. Our Twitter has always clocked in above 250,000 impressions per month, with big months clearing 500,000 and strong engagement on daily posts. Our progressive meetups, with virtually zero marketing outside of social media and sometimes an email, are drawing 30-40 people and rarely the usual political suspects. It is a diverse age range of people concerned about politics.

Compare this to many candidate campaigns, Dem party organizations, and independent groups with budgets 100x ours and they struggled to show similar engagement to our own. Event attendance is rarely more than the host organizations' people, candidates themselves, and campaign staff. Social media engagement, outside of candidates themselves and the largest dark money groups, was a fraction of ours. All those paid ads fell on deaf ears. For a purveyor of political content, we are a pound-for-pound force and have a better return on investment.

The messaging wars are very subjective and everyone believes their message is the best. Personally, I think there are lots of winning messages. Voters are complex, often contradictory, and vote based on a variety of messages. What can definitely be said though is that "Stitt sucks," "aggressively moderate," and the bloodless, issueless campaigns don’t inspire any kind of enthusiasm and clearly don’t turn out voters.. Vicki Behenna is the only one who bucked this trend but she raised $500,000 in a bluish, purple district against a sociopath who was deeply reviled, had a bruising runoff primary, and had to self-fund a lot of his effort. Calvey was clearly gassed or thought he'd win more easily heading into the general election. There may be something to learn there, but expecting all your candidates to raise half a million dollars in Oklahoma is not really it.

As losing efforts go, these campaigns and dark money efforts are even worse than the unsuccessful issue campaigns we have tried in Oklahoma, as they don't claim any new ground. By running on few if any issues, when the campaign is over, there is nothing but badly demoralized supporters left to pick up the pieces. At least with previous losing efforts like SQ 779 (the penny sales tax for teacher pay raises), teacher pay was the number one issue in the state in every poll for the next two years, it laid the groundwork for the teacher walk out and has helped get teachers more than $7,000 dollars in raises since then. That's huge. Since most of these campaigns avoided issues, we are building from the bottom back up with virtually nothing to show for it.

As a little aside, the right wins the messaging wars due to years of teeing up their voters and then having candidates bring it home. The panic about CRT, transgender people (mainly the youth), vouchers, anti-public education rhetoric, and the whole brain-dead abortion debate are years and countless millions in the making. Even locally, groups like the Oklahoma Council for Public Affairs (OCPA), the State Chamber, school choice groups, and countless far-right gun, abortion, and online "news" groups have multi-million dollar budgets and parrot each other's talking points. They invest millions in public messaging so come election time, everyone knows what voters are primed to hear and react to. Candidates don't drive the message, they tap into the message that has been created for them. Dems, the progressive left, suck at doing this effectively or at scale and lose on it every time, we have to get better. While there are progressive issue groups, we're often siloed and have a fraction of the budget and reach that conservative groups do. 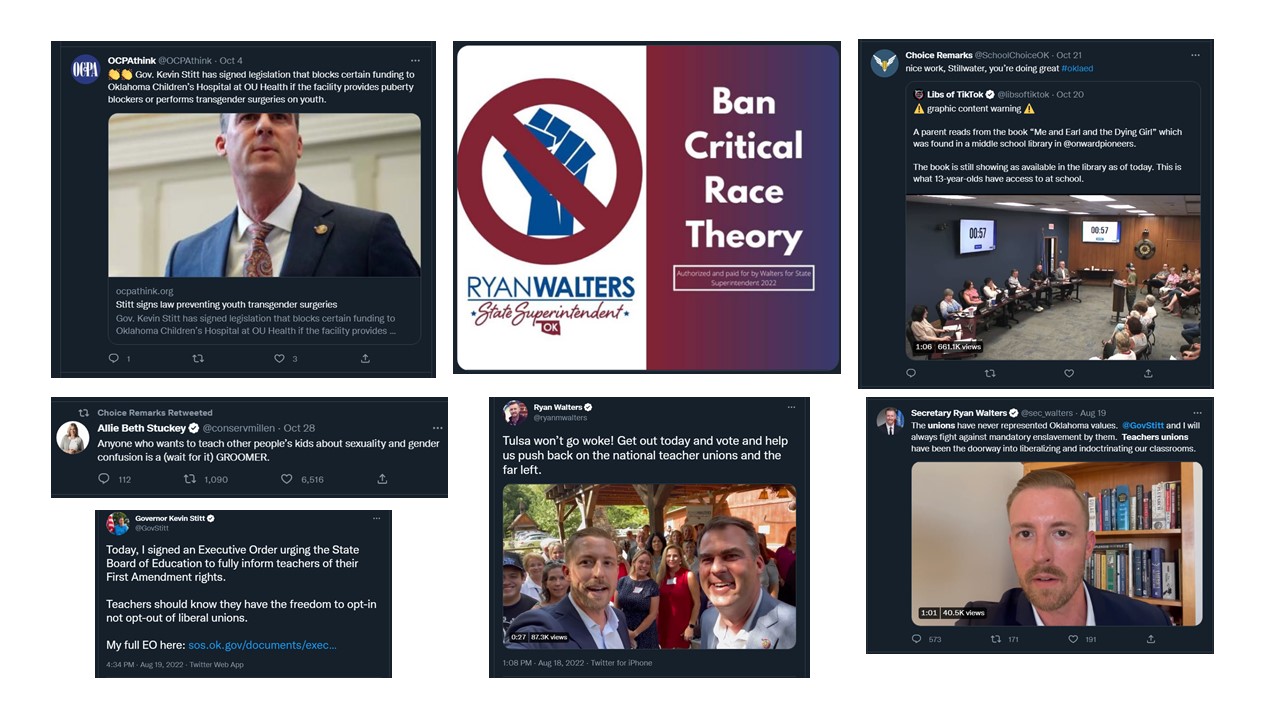 Issues. F*cking. Matter! Conservatives run on issues every single election. Often the same ones cycle after cycle: the border, reverse racism, government schools, or tax cuts for rich people. Voters are busy and need something to cling to when they roll up to the ballot box. By Dems running campaigns without tangible issues and getting everyone singing the same chorus, you end up with what happened in Oklahoma County. Vicki wins with tons of money and a lousy opponent but everyone else down ballot loses. You have voters going out to vote presumably against Stitt or Calvey, who then reelect their legislative allies and partisans in County government. That's not a failure of the voter, it’s a failure of the party.

The last bit about down-ballot campaigns is how badly under-resourced they were. Everyone will talk about building from the bottom up but the four competitive house seats in OK County, the open Commissioner race and the two other County-wide races (Treasurer and Assessor) were dramatically underfunded. While legislative incumbents wracked up huge war chests, often $200K+ to win by 20%, a bunch of down ballot races were lost by less than 10% on budgets of less than $35,000. That's madness. Vicki's DA race was a serious and terrifying race but she won by 10 points and another $100K probably wasn't the difference. Giving Dem legislative incumbents $200K to massacre their opponents is just stupid. Some of them outspent their opponents 20 to 1. Of course they won! Incumbency, massive fundraising advantages and some small degree of power are surefire tickets to success. Letting all these winnable seats lose because nobody wants to help anyone else clearly isn't working. We also had really good candidates. Outside of me (Nick), nobody was some overt activist or radical and we all did about the same. We let a bunch of terrific candidates die on the vine so we could get decimated statewide and allow incumbents to run up the score. Who made these decisions?

We'll talk about where the blame lies in our next chapter, Who is to Blame?

Nick Singer is the director of Oklahoma Progress Now. He has degrees in Math and Economics from Penn State and has been a long time political commentator and organizer.

Support the cause! Donate here or buy merch!