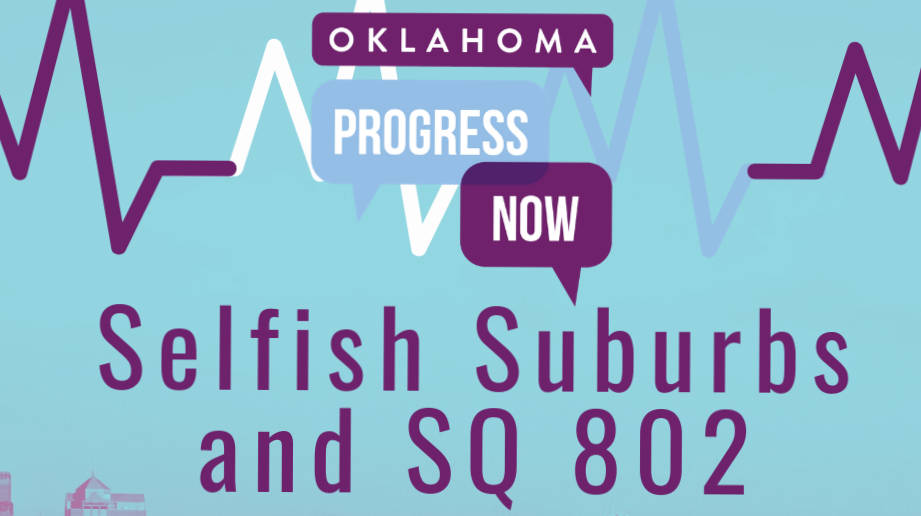 State Question 802 will expand healthcare access to more than 200,000 very low wage Oklahomans. After passing on June 30, 2020, by a margin of less than 1%, many folks, expecting a far wider margin of victory, began the blame game. Maps were quickly produced and it was easy to see an urban/rural divide with the seven largest counties passing it and the other seventy failing it. This is not the real story.

As Dan Wade points out in this tweet thread and we discussed on Oklahoma Progress Now's July 7th show, income is a far better explanation of voter support than being rural or not.

The real story is one of privilege and inequality. It is about who we design our systems for and who we don't. Ultimately, it is about selfishness. 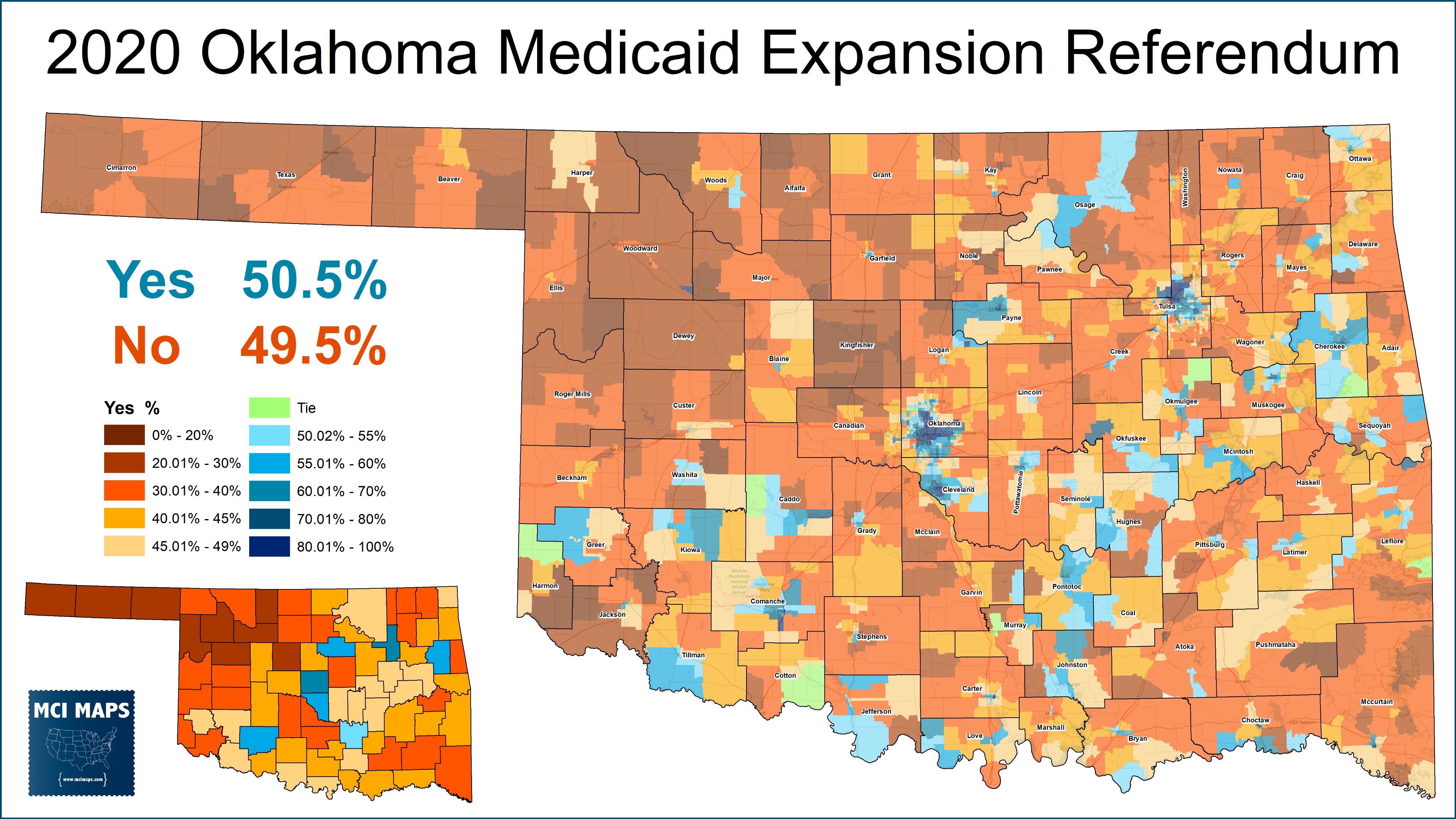 Conservatives stayed oddly quiet after a narrow defeat and many liberals quickly exulted their wisdom about what is best for communities and even many progressives shook their heads and wagged their fingers in wonder at how so many rural folks could vote against their own self interest. The Democratic Party tweeted and folks wondered what happened. While there is certainly an urban/rural divide in our politics, there is something that is a better indicator of our politics. Many rural areas suffer from rampant disinformation or lack of trusted information. Many have deeply held conservative beliefs about the role of government and what is best for people. These change people's opinions about certain policies in ways that are difficult to understand but are also fixable with good communication and engagement around the issue and folks interests.

That said, this warranted further investigation. I tend to believe in voters, even the least informed among us or most polarized, generally, understand their interests and whether something will help them or not. A lot don't vote because they feel there is nothing in it for them. Our system is set up to reward the already wealthy and powerful, so why should poor or marginalized folks vote? Because of this and other barriers, we have a system where the wealthy make up a far larger portion of the electorate than they make up of the population. Looking at the 802 results through the lens of income, wealth and voter turnout, it is obvious that vast tracks of empty land aren't voting this down as much as people with money in parts of the state that don't meet an honest definition of rural and certainly not the type many city dwellers imagine.

Three factors drive voter turnout. Education, income and age. The higher these three things are, the more likely you are to vote. All three together makes you a 90%+ likelihood voter in any given election. This on its face would make the poor or less educated voter an unlikely explanation for why 802 did so poorly because many don't vote. There is also the matter of where people live. Both yes and no votes come from areas where people live. Rural areas don't have a ton of population, so there are just less voters in general. 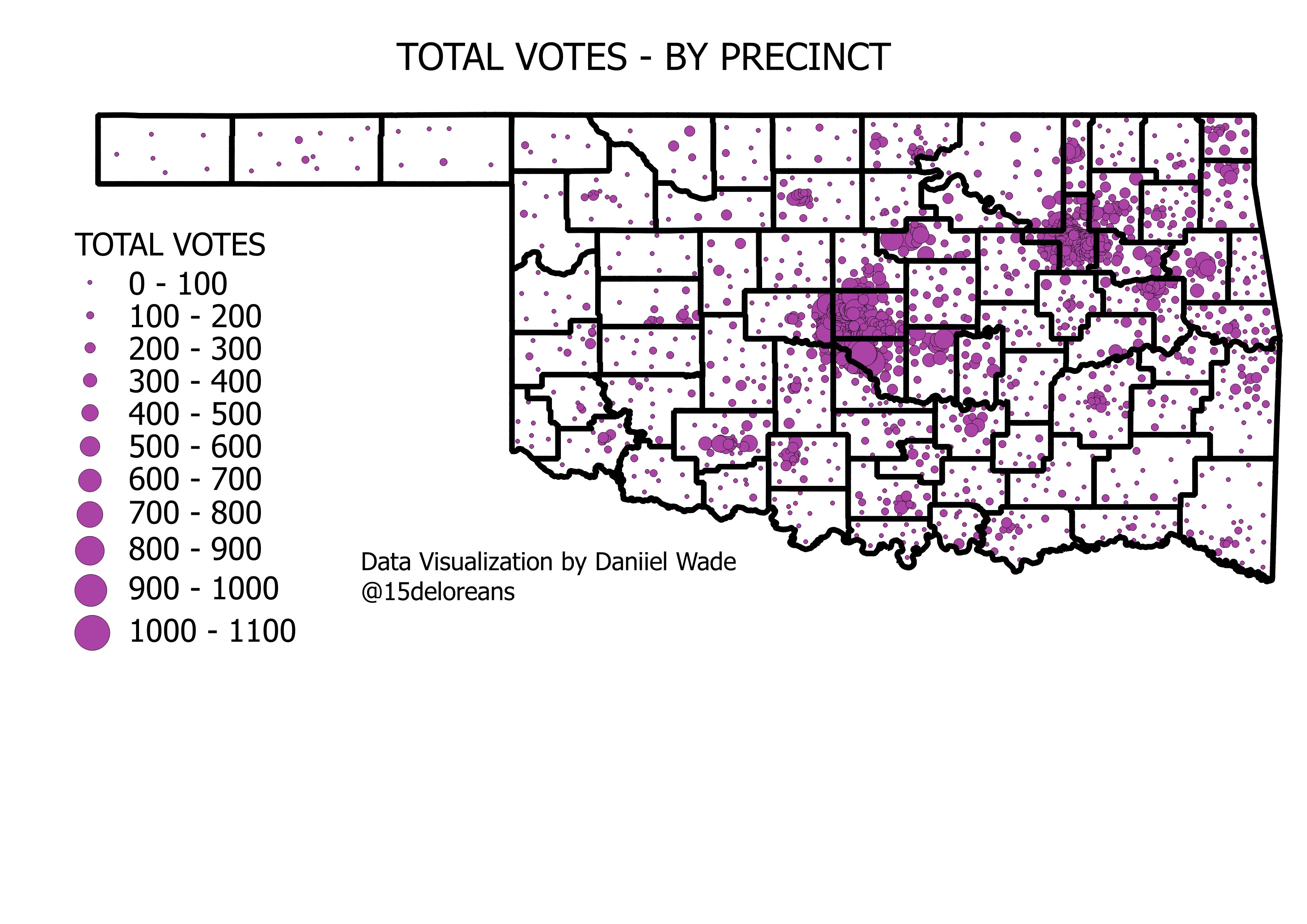 By looking at maps for median income and SQ 802 support next to each other, you can see solid no voting areas ringed the states largest cities where median incomes are highest. Much of the anti-802 votes don't come from the part of Oklahoma anyone would consider rural because nobody lives there. These anti-802 votes come from areas that are within 30 miles of urban centers and overlap perfectly with the highest income areas of the state. 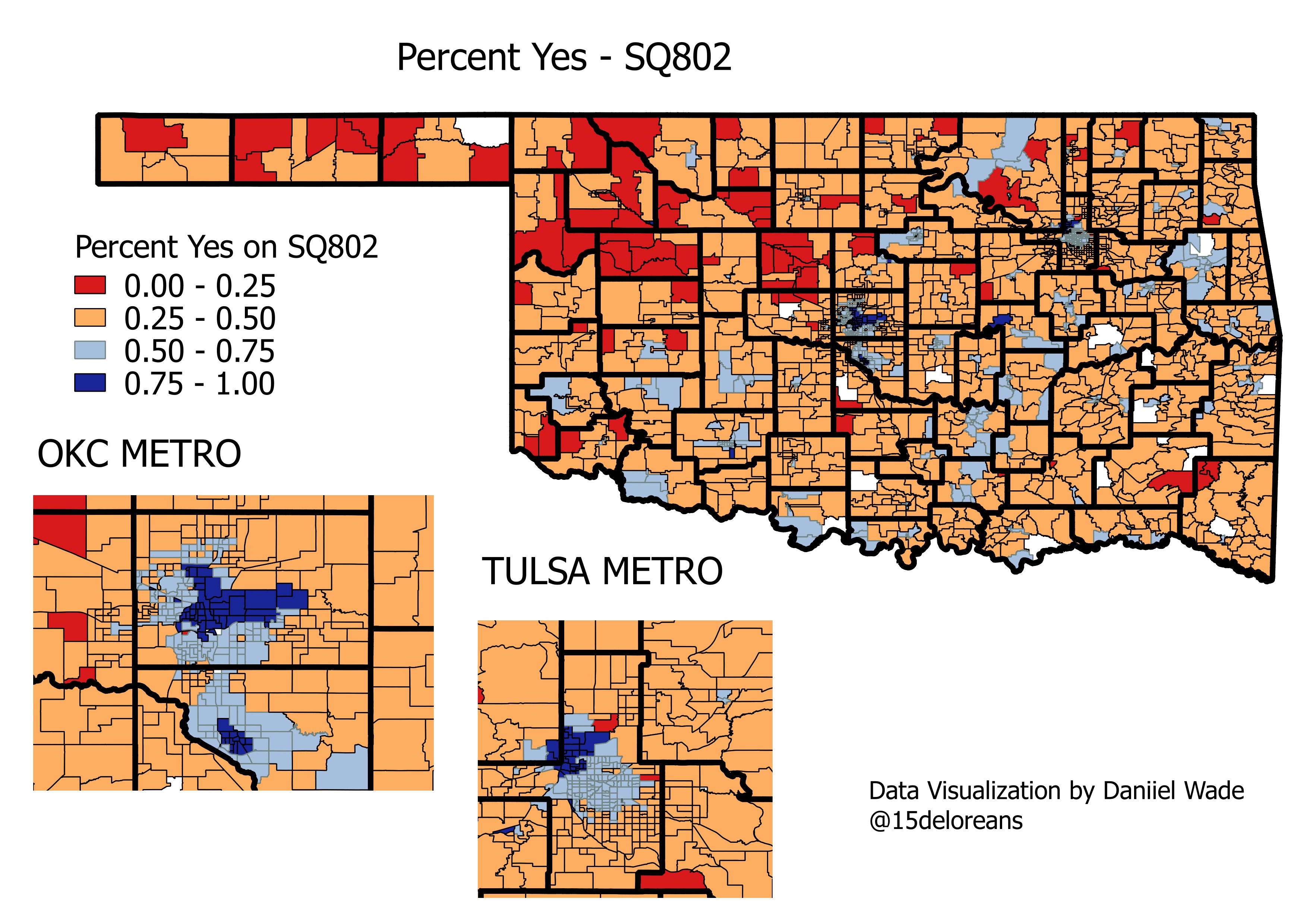 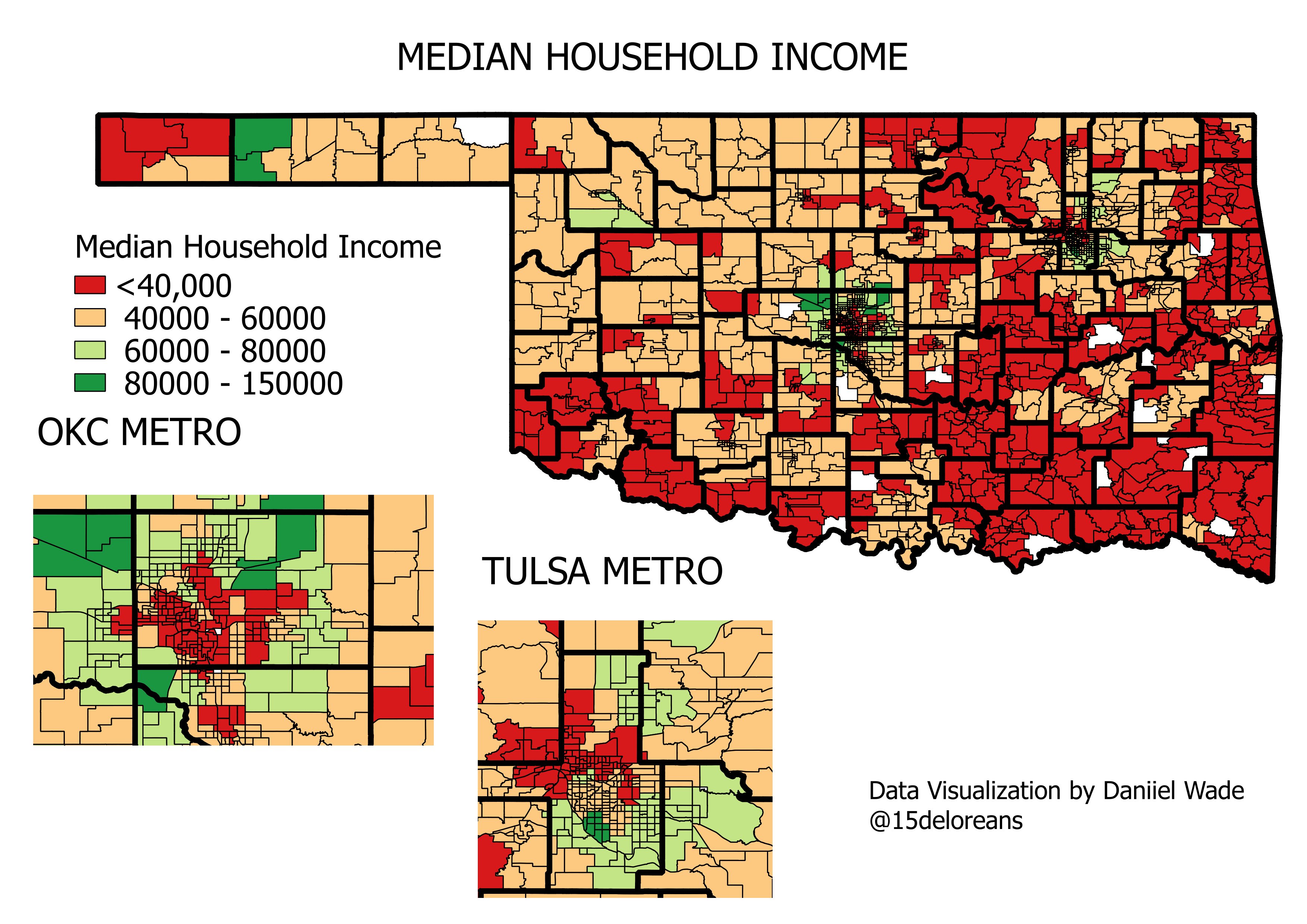 When looking closer at the data and taking a slightly more realistic definition of rural, one begins to see something different appear. Looking closely at the precinct data you notice that while yes, the urban centers in almost every population area (including booming metropolises of Enid, Ardmore and Ponca City), voted yes, the suburbs and exurbs did not. Even pockets inside cities voted against 802, most notably Precinct 101 in the heart of Nichols Hills in OKC. This is not the picture of poor people voting against their self interests.

An even more revealing pair of maps is how the richest 200 and poorest 200 precincts voted. As Dan points out, the wealthiest precincts failed SQ 802 with only 44% voting Yes and in the 200 lowest income precincts, 57% voted Yes. Yikes! There is some urban/rural divide in votes between urban and rural low income precincts, that is mostly explained in racial differences which we'll talk about the effects of race below. But even among white voters, the large, wealthy suburbs of western Wagoner County (Broken Arrow) and eastern Canadian County (Yukon) have more voters than all the precincts in southeast Oklahoma. 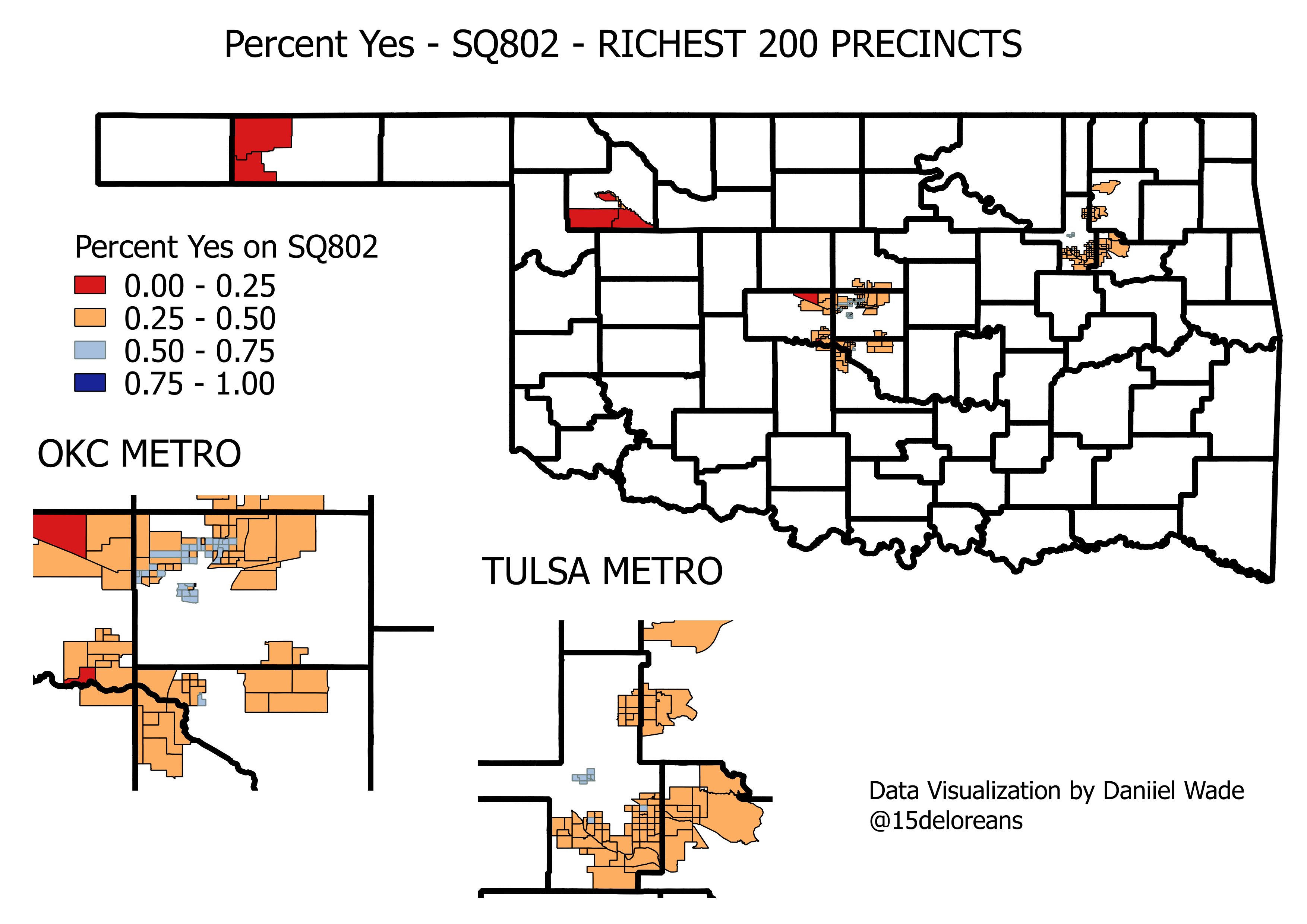 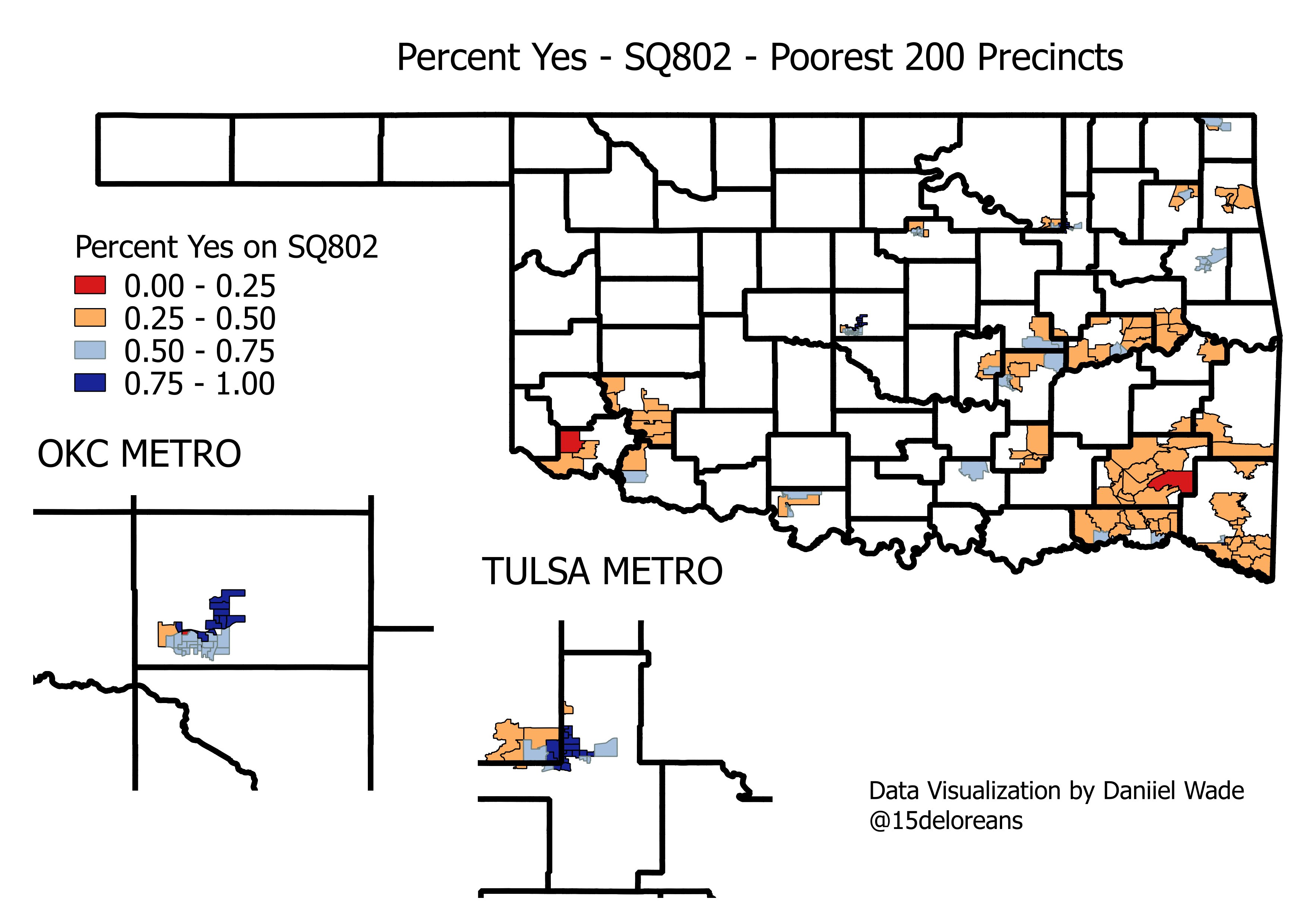 In other words, it is not rural voters that rejected 802, it is rich people, specifically, rich, white people from very high turnout Republican strongholds in the suburbs and exurbs of our major cities. Below is a chart showing the correlation between income and support for 802. Any way you cut this, it is not poor or rural voters nearly killing this but wealthier, suburban voters. 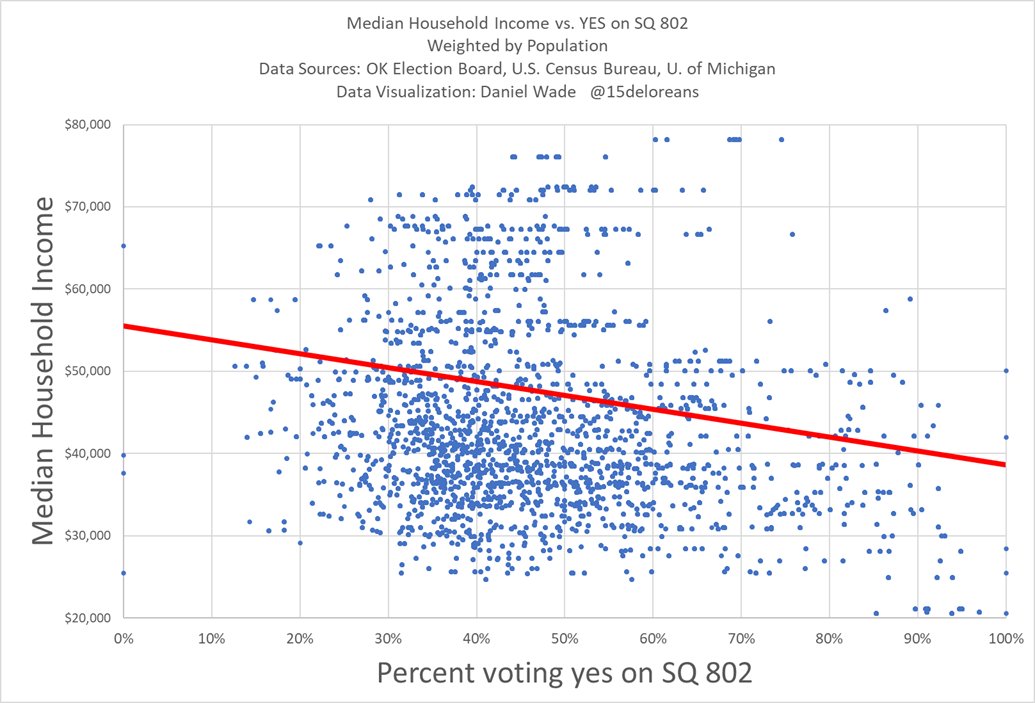 Blaming this on rural voters, especially the canard of the uneducated, backward, small town person is simply not the case. The overwhelming number of no votes came from suburban wealthy professionals, executives and other very highly "educated" voters that received the full brunt of the Yes campaign due to their proximity to the major media markets and status as a likely voter and they went out and voted no anyway!

Who wins and loses?

If one wanted to assume the Vote No campaign's anti-tax argument was persuasive, consider this, a tax increase of $200M, even concentrated on the highest earners (folks over $200,000/yr) amounts to an income tax increase of less than 2%. If it was spread out over everyone, it would take less than a 1% income tax increase. A tax increase the equivalent of a cost of living adjustment, one so small as to be almost unnoticeable is enough to convince some of the wealthiest in our state to vote no on healthcare access for 200,000 extremely low income Oklahomans? That is messed up! Add to this, that hospitals have already said they will likely cover the state portion just proves it isn't about taxes, rich people just don't want poor people to get healthcare.

Who are these 200,000 people? First, they are working. Our Governor and his conservative allies routinely lie about this or imply otherwise. Stitt called them "able-bodied adults" as if for that reason they don't need healthcare. What he leaves out is that these adults covered by expansion only qualify if they are 1) earning an income i.e. working and 2) under a certain limit. What is that limit? For a single person, it is making less than $8.50/hr full-time or $17,500/yr or a single parent with two kids making as much as $14.40/hr or around $30,000/yr. A few might say, well that is a fine wage, but obviously it is impossible to live on and certainly not one you can afford both family healthcare AND basic things to support a family.

It is also worth noting there is a significant racial divide as well. While a lot of this could also be waved away as partisanship (people who vote R or D), I think affinity groups make a better explanation of voting intentions since many partisan voters show up or not depending on the election. It is more about turnout than changing anyone's mind. Since 2016, much has been written about the loss of white working class voters, traditionally Democrats, to Trump. I maintain, like this vote on Medicaid expansion, the base for Trump or against this measure is wealthy whites. Fickle swing voters, lower income whites, may flip close margins, but there are lot of supporters for these sorts of causes that fail to show up at all. We should be focusing on that, instead of so much persuasion.

Studies are showing racial resentment drives opposition to government spending, not the other way around. When looking at precincts by race, you see even more extreme splits. Many majority Black precincts, no matter what their metro designation voted in support of 802 by overwhelming numbers. Precincts in eastern Oklahoma with large tribal populations also voted to support. White voters, both suburban and rural were many points less supportive than their BIPOC counterparts.

In our incredibly segregated cities and towns, if we look at precincts on the eastside of OKC, the northside of Tulsa, Boley (a historic Black town), Langston, Muskogee, and Lawton, you can find dramatic splits in parts of town with larger concentration of Black voters. In Cherokee County, where tribal leaders came out strongly in support of the measure, it passed as strongly there as in college towns like Norman and Stillwater.

So to my liberal allies, please watch disparaging rural voters. They are not to blame. The margins in some of the poorest rural areas weren't that large and there is a significant information deficit in many media markets. If you are looking to assign blame, it belongs with the people who pretend to be the most able to make a rational, reasonable decisions but really vote to be a combination of racist and selfish. It belongs on the wealthy. They got all the best information and still chose to make a terrible choice nearly sinking healthcare for hundreds of thousands of working Oklahomans. Oklahomans they pay poverty level wages.

This is also a challenge for statewide Democrats. This was an incredibly close vote on something that was low risk to some, very high reward to others and common sense to many. If political leaders are going to move beyond current thinking in Oklahoma, voters need to better understand what is at stake and who is really looking out for their interests. By taking bolder positions and being more clear who wins and loses and why, I think we can push the margins out on a number of good policies and candidates. If we couch everything in the language of what's good for business or taxpayers, I think we risk continuing to miss opportunities for change or struggling to win the winnable fights.